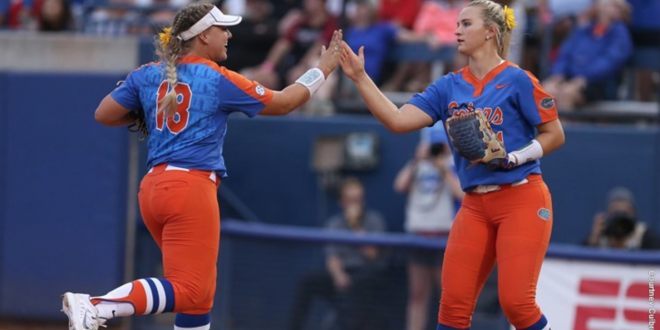 No. 5 Gator Softball Prepares for No. 8 FSU

The Florida Gator softball team (41-7) gets its chance to defeat in-state rival, Florida State University (38-8) on their home field, the same way FSU did in Tallahassee earlier this season. The rivals will meet Wednesday at Katie Seashole Pressly Stadium at 6 p.m.

On April 11, the Gators fell, 4-1, to the Seminoles in the first game of the Fresh from Florida Sunshine Showdown. FSU pitcher Kylee Hanson (20-3) held the Gators to just two hits and one run.  An RBI double by Kayli Kvistad allowed Alex Voss to put the lone run on the board.

But the Gators have been in a scoring frenzy since then. Florida is coming off a conference sweep over Mississippi State. Gator offense combined for 17 runs in the three-game series over the weekend. A grand slam from Amanda Lorenz in game one and a complete-game shutout from Kelly Barnhill (21-1) in game two pumped up the Gators.

Having runs on the board and Barnhill and Aleshia Ocasio (16-5) in the circle gave the batters confidence to step up to the plate swinging.

Posted a .636 batting average with seven hits, seven runs scored and eight RBI in a 4-0 week for @GatorsSB.@amandalorenz18 is the #SECSB Player of the Week. pic.twitter.com/Y1SrgXwPQk

The Gators aren’t the only team who is sweeping weekend series. In three games, Florida State defeated Louisville 15-1 in Tallahassee. The Noles even run-ruled the Cardinals, 8-0, in game two.

T6 3-1 FSU | Kylee Hanson heads back into the circle for the sixth inning and was just drafted No. 5 overall in the @profastpitch draft by the @CLE_Comets! pic.twitter.com/TzNUeKqta5

Hanson improved to 23-3 on the season, after she retired the final 19 batters she faced. Hanson allowed one run on one hit with zero walks and six strikeouts. For the 16th time this season, she has given up two or fewer hits in an appearance. It’s the 10th time in her last 12 games.

The Top 10 teams will square off in Gainesville at 6 p.m. to conclude this year’s Florida Sunshine Showdown.

Kate Venezio is a fourth-year telecommunication-news student at the University of Florida. Kate does it all: Behind the camera she captures emotional moments as a photographer for the University of Florida Athletic Association. She's comfortable being in front of the camera, too. Kate interviews players, coaches, fans and family members for pre- and post-game coverage as a beat reporter for ESPN Gainesville/WRUF-FM. In addition, Kate produces the sports segment for the weekly WUFT News program. There, she's responsible for writing the script in its entirety to include production commands. The presentation includes video highlights and interviews taped and edited, and Kate then live anchors the final package on a daily deadline. In addition, she writes stories for wruf.com where she informs sports fans of local, state, and national trending topics. Kate also utilizes social media as a tool to help get the stories in front of viewers.
@@kate_venezio
Previous NBA Playoffs Continue with Game 5 Matchups
Next Townsend Gearing Up for NFL Draft