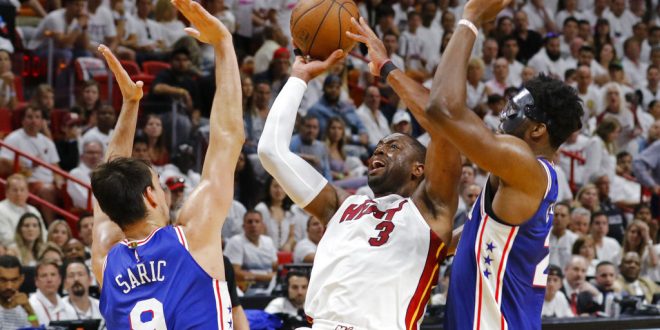 The NBA Playoffs are in full swing with three Game 5 matchups tonight.

Tensions are running high between these two teams heading into Game 5. With the Sixers holding a 3-1 lead, the Heat face the risk of elimination.

Goran Dragic has been leading Miami, averaging 19.5 points per game. Dwayne Wade has provided some late-game energy, holding off a possible comeback from Philadelphia in Miami’s only win.

We're exactly 24 hours away from a must win Game 5.

The Bucks needs a strong offensive performance from Giannis Antetokounmpo, while the Celtics need to try to overcome Milwaukee’s defense. Another high-scoring night for Jaylen Brown would be huge for Boston’s offense.

Antetokounmpo says trust is key for the Bucks.

The San Antonio Spurs have forced a Game 5 against the Warriors. Golden State had a 3-0 lead heading into Game 4. Steph Curry (knee) remains out for the Warriors, while Kawhi Leonard (quad) is out for the Spurs.

Kevin Durant said despite the Game 4 loss, the team is moving on and focusing on Game 5.

Born and raised at the ballpark! Typically quiet- until it comes to sports. I'm a South Florida native with a passion for baseball nearly as strong as my faith. Grew up in garnet + gold, turned out sporting orange + blue. Likely to be found with a camera. And yes, I take food pictures.
@victoriarossman
Previous Derwin James – Draft Ready?
Next No. 5 Gator Softball Prepares for No. 8 FSU