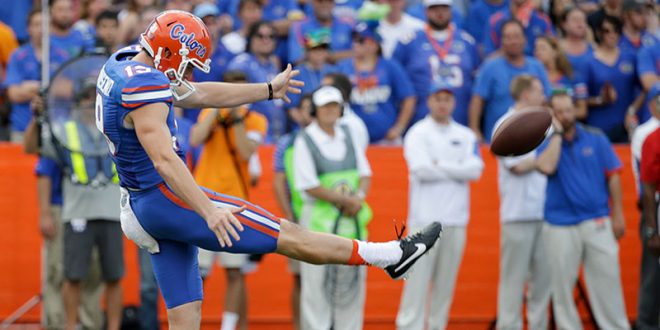 FILE - In this Sept. 26, 2015, file photo, Florida punter Johnny Townsend kicks against Tennessee during the second half of an NCAA college football game, in Gainesville, Fla. Florida kicker Eddy Pineiro and punter Johnny Townsend are looking to become the first specialists drafted from the same team in the same year since 1985. (AP Photo/John Raoux, File)

Townsend Gearing Up for NFL Draft

Johnny Townsend did a lot of kicking for the Florida Gators. Now, with the NFL Draft approaching, he’s looking for an opportunity to keep doing so.

Townsend described his last couple of months as “hectic.” He participated in the 2018 Reese’s Senior Bowl, the NFL Combine and Florida football’s pro day in order to showcase his skills for teams.

Townsend said he is starting to feel anxious as everything winds down for the NFL Draft.

“I had a bunch of teams come in and do one-on-one workouts with me,” he said. “That’s a great opportunity for these special teams coaches to really see me in person.”

He said it allows the coaches to get inside his head and put him through different situations and game-time scenarios.

In his three years as the starting Gators punter, Townsend ranked in the top 10 in average yards per punt, including two straight seasons holding the top spot.

Townsend said he’s received a lot of attention from teams. The list includes the Oakland Raiders, who released Marquette King at the beginning of April.

Other teams that could need new punters:

Townsend said there are a lot different things coaches want to see when working out punters.

On different kinds of kicks:

“They kind of just want to see how many clubs you have in your bag,” Townsend said.

He said a punter having total control over the ball (kicking it in different directions and to alter in-air movements) can make a player at that position special.

“Winning the battle of field position is one of the biggest things in the game of football,” he said.

Townsend said that to him it does not matter what team he ends up playing for at the next level. The Orlando native said he grew up following teams like Tampa Bay, Miami and Jacksonville.

But, Townsend said he would be happy with any opportunity to play in the NFL.

Previous No. 5 Gator Softball Prepares for No. 8 FSU
Next Can Josh Allen Back Up his No .1 Potential