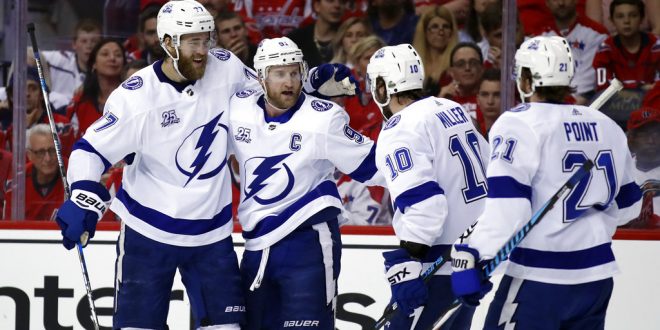 Lightning Bounce Back in Game 3 Against Caps

After dropping the first two games in Tampa to the Washington Capitals, the Lightning bounced back for a 4-2 win on the Capitals’ home ice.

Steven Stamkos and Nikita Kucherov were dynamic for Tampa’s top unit. They each had a power play goal and an assist. Victor Hedman was a star in Tampa Bay’s back end, coming up with the Lightning’s third goal and providing two assists in the game.

The Lightning were outshot 38-23 by the Capitals, but Andrei Vasilevskiy rebounded from a difficult first two games to put up a big performance, making 36 saves and preserving Tampa Bay’s lead throughout the game.

Stamkos got the action started with 6:07 left to go in the first period. On the power play, Hedman took a pass from Brayden Point and fed Stamkos, who one-timed it from the face-off dot past Braden Holtby for the 1-0 Tampa Bay lead.

The Lightning extended their lead second via goals from Kucherov, Hedman, and Point.

Hedman fed Kucherov on the power play before the winger blasted a one-timer past a Brooks Orpik screen to make it 2-0.

Shortly after, Kucherov played a pass back to a trailing Hedman who wasted no time finishing into a wide open net to make it 3-0.

“the lightning can only score on the power play”#TBLvsWSH | #StanleyCup pic.twitter.com/Zr5DuNLtVk

The Caps pulled a goal back later in the period via Brett Connolly, but a Point goal late in the period off a faceoff put the game out of reach from Washington. Kuznetzov went on to score from a tight-angle blast in the third period, but it wasn’t enough as Tampa Bay saw out the 4-2 win.