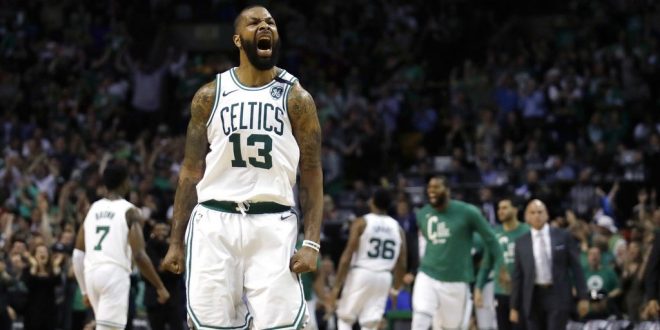 Boston Celtics forward Marcus Morris reacts to a basket during the second half in Game 2 of the team's NBA basketball Eastern Conference finals against the Cleveland Cavaliers, Tuesday, May 15, 2018, in Boston. (AP Photo/Charles Krupa)

Celtics Go Up 2-0 on LeBron, Cavs After Big Second Half

The big question after Game 1 of the Eastern Conference Finals was: could the underdog Celtics blowout the Cavaliers again?

That question was answered emphatically with a yes Tuesday night.

Balance Leads the Way for Celtics

Boston withstood an early onslaught from LeBron James, and used a second half in which it outscored Cleveland by 20 to take Game 2 at TD Garden 107-94. The win now puts these young Celtics just two wins away from the Finals, while the Cavs must win four of the next five games if James is to reach his eighth consecutive Finals.

Rozier went off in the third quarter and finished with 18 points, while Al Horford made big plays down the stretch as part of his 15-point, 10-rebound double-double. Marcus Smart pitched in with 11 points, nine assists and four assists, and made big hustle plays in the second half as part of his game-high +21 rating.

It took all of this to hold of a James that looked like he was on a mission from the opening tip off. James has gone off in each Game 2 this postseason, and this one was no exception. In the first quarter alone, James had 21 points on 8-for-13 shooting from the field. The Cavs led 27-23 after the first 12 minutes and looked like they might go on to win. James finished with with 42 points, 10 rebounds and 12 assists. It was about as good a performance from him as Cleveland could’ve hoped for.

LeBron is AVERAGING a 40-point triple-double in Game 2s this postseason. pic.twitter.com/WDSgNZfsxW

The downfall for Cleveland was that outside of James and Kevin Love (22 points), it didn’t get much scoring from anyone else. Kyle Korver was the only other Cavalier to score in double digits with 11 points.

The Cavs’ scoring struggles were exemplified by the disparity between the two teams’ backcourts. Their starting backcourt of George Hill and J.R. Smith was outscored by Boston’s of Terry Rozier and Jaylen Brown 41-3. Hill and Smith combined to go 1-for-11 from the field, with Smith’s only moment in the spotlight being his flagrant one foul on Al Horford mid-way through the fourth quarter.

Despite Cleveland’s supporting cast not being that effective, Cleveland still entered halftime with a 55-48 lead on the back of James’ 25 first half points.

Boston flipped the script in the third quarter though, outscoring Cleveland 36-22 in the frame. A barrage of three’s from Morris, Rozier (14 points in the third quarter) and Smart helped give Boston a lead at 72-71, it’s first lead since the beginning of the first quarter. On the ensuing play, a loose rebound fell to Rozier, who sprinted past the Cavs defense and threw down a dunk with LeBron trailing for a possible chasedown block that sent the TD Garden into a frenzy that continued for the rest of the game.

The teams will have three full days of rest before the series picks back up Saturday in Cleveland for Game 3.

Native New Englander. Follow me on Twitter: @jonacosta_10
@jonacosta_10
Previous Saquon Barkley’s First Rookie Camp in the Books
Next Lightning Bounce Back in Game 3 Against Caps