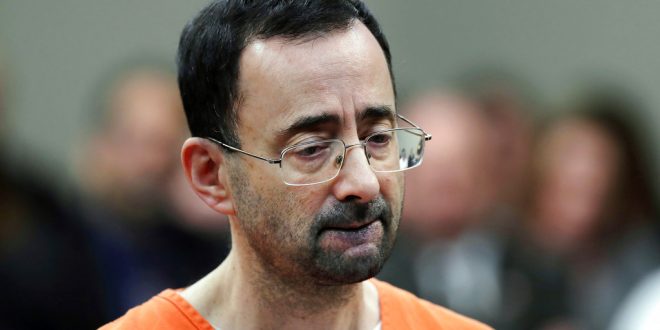 FILE - In this Nov. 22, 2017 file photo, Dr. Larry Nassar, 54, appears in court for a plea hearing in Lansing, Mich. Michigan State University announced Wednesday, May 16, 2018, that it has reached a $500 million settlement with hundreds of women and girls who say they were sexually assaulted by sports Nassar in the worst sex-abuse case in sports history. (AP Photo/Paul Sancya, File)

For the 332 women molested by Larry Nassar, Wednesday’s settlement with Michigan State University is just another step on the long road to closure.

Earlier in the day, reports emerged that the institution — who employed Nassar as a sports physician from 1997 to 2016 — agreed to pay a total of $500 million to the predatory physician’s victims. According to CNN, the settlement provides that $425 million of the sum be paid to current claimants, with the remaining $75 million to be held in reserve should other survivors come forward.

My God, the human carnage and institutional damage this guy and his enables have wreaked is prodigious and thoroughly sickening.https://t.co/eyh8mRyAmO

A former team doctor for USA Gymnastics, Nassar, 54, became a household name in September 2016 when Rachael Denhollander, a former gymnast, became the first to accuse him of sexual abuse.

Since then, hundreds of other of women came forward with their stories, illustrating a pattern of abuse dating back to 1992. Accused of violating at least 250 different women, Nassar was found guilty on multiple counts of sexual assault of a minor. In addition to a separate federal child pornography charge, he’ll remained imprisoned for a minimum of 100 years.

As court proceedings drew on, Michigan State was accused of covering up Nassar’s misconduct. Per the same CNN article, the university claimed to have not known of the doctor’s acts until they were first published in a newspaper report two summers ago.

Survivor Kaylee Lorincz, 18, also alleged that interim president John Engler tried to offer her a $250,000 check without her lawyer present to settle her civil lawsuit.

“The settlement is a win for us and (I) appreciate that it is a step in the right direction,” she told CNN, “but I’m disappointed in the lack of compassion from MSU and that their tone toward the survivors has not changed.”

It’s actually $425 million ($75 million held in reserve), working out to about $1.4 million per victim because Michigan State covered up sexual abuse for more than TWENTY YEARS. https://t.co/XpQiQ08Idn