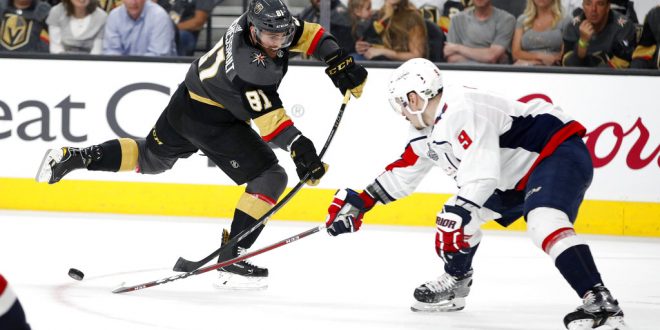 In Game 1 of the Stanley Cup Finals, the speedy Vegas Golden Knights squeaked out a 6-4 win over the Washington Capitals Monday night.

It was a high-scoring game with a wild series of events.

The Capitals and the Knights took turns leading the game. The lead changed hands a total of four times throughout the night.

Vegas’ Colin Miller scored the game’s first goal more than halfway into the first period, but Washington had an answer for that. Within 42 seconds, Brett Connolly and Niklas Backstrom scored two goals, putting the Capitals in a 2-1 lead.

The Knights were down, but not for long. Within a few minutes, William Karlsson tied the game with a shot off the shoulder of Capitals’ goalie Braden Holtby. Reilly Smith scored a goal early in the second period, returning the lead to Vegas 3-2.

However, the lead didn’t last.

Washington’s John Carlson tied the game, and Tom Wilson put them back on top, 4-3, early in the third period.

One might credit Wilson’s goal to Knights’ goalie Marc-Andre Fleury, who inadvertently kicked the puck into his own net.

Vegas took back the lead, 5-3, with goals scored by Ryan Reaves and Tomas Nosek. Nosek sealed the win with another goal with 10:16 left in the third period.

The goal was reminiscent of the game-winner Nosek scored for the Grand Rapids Griffins in the final seconds of Game 1 of the Calder Cup Championship.

The Capitals look to bounce back from this early series loss in Game 2 on Wednesday at 8 p.m.

Camille Woodhouse is a Sports and Media student at the University of Florida College of Journalism and Communications. In the past, she has covered the Atlanta Falcons and Florida Gators football for various sports news outlets. She is an Atlanta native and a fan of football.
@CJW_SportsRadio
Previous Later, Gator? Jalen Hudson Pulls Out of NBA Draft, Will Return to Florida
Next Snell, Rays look to take advantage of pitching mismatch