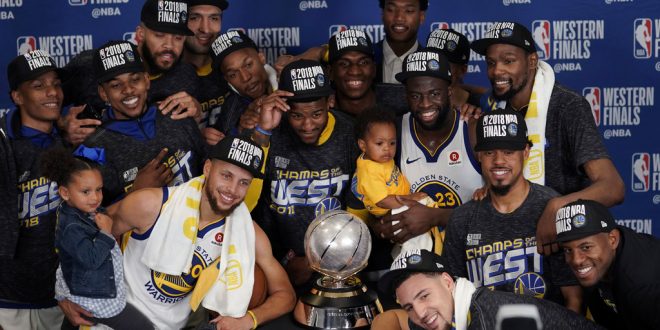 The Golden State Warriors pose with their trophy after defeating the Houston Rockets in Game 7 of the NBA basketball Western Conference finals, Monday, May 28, 2018, in Houston. (AP Photo/David J. Phillip)

Warriors Return To NBA Finals After Game 7 Win Over Rockets

And after breaking the single season record for three’s in a season for the second year in a row, a feat that helped them to 65 wins and the top seed in the West, the Houston Rockets’ season ended with the three-ball Monday night.

The Golden State Warriors took down the Rockets in Houston 101-92 in Game 7 of the Western Conference Finals. A 7-for-44 shooting night from beyond the arc doomed Houston, while Golden State found its usual sharp-shooting form, and used a third quarter rally to take the lead for good.

“I’m proud of the way we just battled,” Warriors guard Klay Thompson said. “We’ve been through a lot of ups and downs with this team, believe it or not. It’s not all success with the Warriors, we’ve had our bumps this season.”

“But to get to this point, we earned it.”

Kevin Durant scored 34 points and Stephen Curry scored 27, as the two combined to shoot 12-for-26 from three-point range. Thompson, the star of Game 6, pitched in with 19 points on an efficient 8-for-13 from the field. Draymond Green added a 10-point, 13-rebound double-double.

For the Rockets, James Harden put up 32 points as he shouldered a heavier load with Chris Paul out. Eric Gordon, who’s been in the starting five since Paul went out, contributed 23 points. However, he and Harden had far from efficient nights, with the two combining to shoot 4-for-25 from three.

The win books Golden State’s fourth consecutive trip to the NBA Finals, and a fourth consecutive date with LeBron James and the Cavs. The two teams join the 60’s Celtics, 80’s Lakers and Celtics, and the 2011-2014 Heat as the only five teams in NBA history to make it to four consecutive Finals.

Meanwhile for Houston, they’ll be left wondering ‘what if’ this offseason.

“What if Chris Paul had played?” Paul, after all, had been crucial to Houston taking a 3-2 series lead, but missed the last two games of the series after suffering a hamstring injury in the final moments of Game 5.

“What if our three’s had continued to fall?” Houston, after all, made six of their first 14 of Game 7, and at one point led 48-33 just minutes before halftime.

While the Rockets knew they wouldn’t have Paul, there was no way they could’ve known how cold they would get in the second half. After an Eric Gordon 29-footer with 6:43 left in the first half, Houston missed an NBA playoff record 27 consecutive three-pointers. The drought didn’t end until P.J. Tucker knocked one down from the corner with 6:28 left in the fourth quarter.

It's the most by one team in a playoff game in NBA History. pic.twitter.com/RI85mzw5pe

The damage had already been done though. Over the course of the 24:14 in between, Golden State outscored Houston by 27, turning a 14-point deficit into an 89-76 lead. In the third quarter alone, the Warriors outpaced the Rockets 33-15, turning the momentum of the game and stunning the home crowd.

Game 1 of the NBA Finals is Thursday night in Oakland, with Golden State having home-court advantage for the series.

“Definitely, it’s exciting to get another opportunity to compete for a championship,” Durant said. “One series to go, hopefully, we figure it out and get it done.”