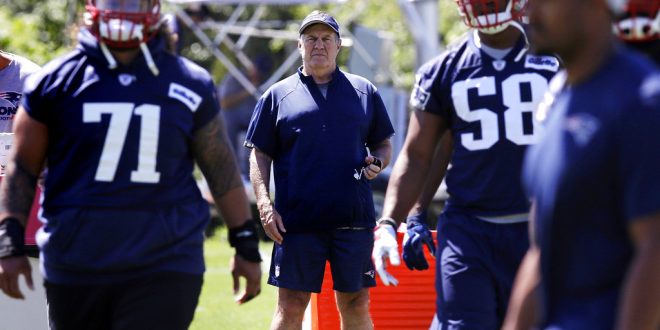 NFL OTA’s Around The League

The Offseason. Tis’ the most hated season for all NFL fans, players, and enthusiasts. Only 97 more days until the new football season. And yet, the offseason is probably the most crucial time of the year.

When summer arrives, the 32 NFL teams regroup after a couple of months of vacation. Minicamps and OTA’s, or Organized Team Activities for short, are installed into the team’s schedule during the summer. These OTA’s are used to help develop players and range from the incoming rookies to the team’s star-studded veterans. Offseason training began back in mid-April and OTA’s have begun for most teams in mid-May.

Some OTA’s have run smoothly, while some teams have been involved with some offseason drama.

Earlier this week, Cassius Marsh, Defensive end for the San Francisco 49ers had a lot of negative opinions to say about his former Patriots team. Mentioning how he had no fun there and that playing in New England made him rethink about continuing his football career, according to msn.com.

Although Marsh doesn’t have a high profile resume in the NFL, with him only having two starts and six sacks in his entire career, his comments didn’t settle well with All-Pro linebacker Dont’a Hightower.

In other words, if you’re joining a team with so much success in the past two decades, then you should know how hard it will be to fit in and accustom to the hard work that the team is used to under head coach Bill Belichick.

Hightower is coming off a torn pectoral muscle back in October 2017.

Dont'a Hightower gives an update on his health. pic.twitter.com/M3JQqodvAB

Following last season’s rough patch of crucial missed catches between quarterback Matt Ryan and wide receiver Julio Jones, Jones hasn’t shown up to voluntary OTA’s this offseason. Jones has been seen working out at the University of Alabama but has yet to workout with the Falcons.

The team mentioned that this situation might be tied with Jones request of a pay raise, although he hasn’t publicly said so, according to ESPN.com.

Julio Jones: "I am [going to be a Falcon for life].” https://t.co/RWCfurDOjz pic.twitter.com/kFCel33imd

Matt Ryan gave his thoughts on the absence of his teammate.

Head coach Dan Quinn expects Jones to be back with the team in mandatory minicamp come June 12.

#Vikings TE @KyleRudolph82 on Kirk Cousins:
It's been a lot of fun, Kirk is a phenomenal QB…he fits into our locker room really well…he just wants to be one of the guys and I told him he is going to be a really big piece of us taking that next step #mattress pic.twitter.com/DUz8rmzz9h

Kirk Cousins has something to prove this coming season, just like he has every season under franchise tags. But, this season, in particular, will be different. Now with a new team and city, he’s looking forward to learning the playbook as fast as possible.

The Vikings had a great run last season, finishing just one win shy of the Super Bowl. Even though Case Keenum played efficiently well for them that he wasn’t enough to get them to the big stage. Now, on their fifth quarterback in four years, Cousins will ask yet again if everyone will like what he’ll do with the new look offense.

Recent grad from the University of Florida. Editing all articles on here while helping out the newbies. Love all things basketball.
@@MarcoJMartinez_
Previous NCAA Women’s College World Series: Florida Takes on UCLA in Game 2
Next Gators Rally From Early Deficit to Defeat Columbia 13-5