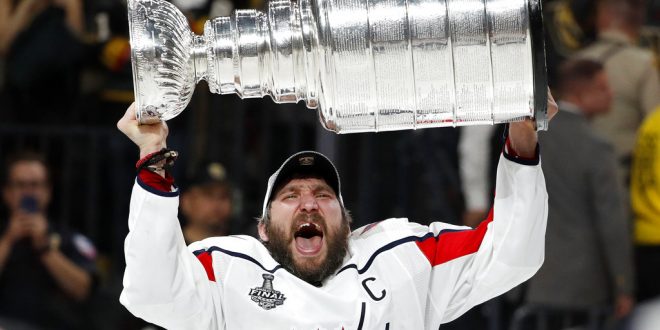 For the first time in franchise history, the Washington Capitals can now call themselves “champions.” After traveling to Las Vegas to battle the Golden Knights, the Capitals reign after a 4-3 victory.

Road to the Cup

A very defensive first period took center stage in the T-Mobile Arena in Vegas. Plenty of shots would be saved from both ends by Vegas’ Marc-Andre Fleury and Washington’s Braden Holtby, leading to a scoreless first period.

The Capitals would open the second with a victory in the faceoff, thanks to Nicklas Backstrom. The first goal of the game would occur at the 6:24 mark. An even strength goal by Jakub Vrana would put the Capitals up 1-0, before a goal from Nate Schmidt would tie the game at 9:40 in the second.

30 seconds after, Alex Ovechkin would score for Washington, with an assist from Backstrom and John Carlson. The Golden Knights would answer with two goals from David Perron and a powerplay goal by Reilly Smith to close the second. With the end of the second period, there would be three lead changes going into the final 20 minutes.

After a back-and-forth start to the third period, Devante Smith-Pelly would tie the game at 9:52 to keep Washington’s hopes alive for a Stanley Cup. Three minutes after, Washington would take control of the scoreboard after the eventual game-winner from Lars Eller.

Vegas was unable to find an answer, leading to Washington’s first Stanley Cup. The fan reaction in Washington would say it all. The moment would finally come true. The Washington Capitals were going to hoist the NHL Stanley Cup.

In his storied career, Ovechkin had never been to the Stanley Cup Finals. In 2018, he would more than seize the opportunity. The 14-year veteran now leaves Vegas with not one, but two trophies. Winning the Conn Smythe Trophy as the playoff’s MVP, life seems pretty good for Ovechkin.

For Ovechkin, in his own words, the moment of winning the NHL Stanley Cup and playoff MVP feels like a dream.

The sports world would react to the Capitals winning a cup, including head coach Barry Trotz.

ESPN would commemorate the win with a throwback to a SportsCenter commercial featuring the Stanley Cup.

Ultimately reaching the Stanley Cup Finals for the first time since 1998, Washington will celebrate history. Finally, after being close in the past, the Capitals knocked on destiny’s doorstep and seized the chance.