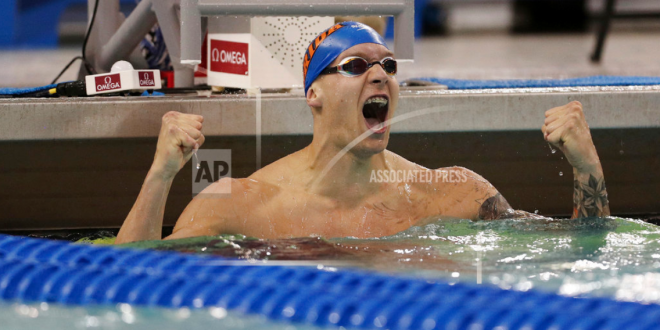 After spending the last 20 years at the helm of the Florida Gators’ swimming and diving program, Gregg Troy announced on Wednesday that he would be retiring from collegiate swimming.

But the Gators’ coaching change will not signal a drastic change in culture.

Instead, the Gators have decided to promote assistant coaches Jeff Popell and Anthony Nesty to coach the women’s and men’s teams respectively.

Troy will go down as one of the most successful coaches in Gator history.

The Pennsylvania native was appointed to coach the women’s team in 1998. He would become head coach of the men’s program just one year later.

He led his Gators’ women’s team to a national championship in 2010. The Men’s program has racked up six consecutive SEC titles since 2013. Troy was awarded NCAA Coach of the Year on three different occasions (2002, 2004, 2010). The list of accolades goes on.

The long-time U.S. Olympic coach will continue working with solely Olympic athletes. Troy said he will be working as a performance coach for the Gator Swim Club to help individuals meet their goals at the 2020 Olympics.

As his long-time assistant, Popell, the newly appointed women’s team head coach, recently shared the most important trait he learned from Troy while working under him.

Nesty, who swam for the Gators in the 1980s, is now tasked with leading a young group of athletes back to the summit of the NCAA.

The Men’s team will be losing notable seniors like Caleb Dressel, Jan Switkowski and Mark Szaranek. Nesty, however, was quick to take full responsibility for the challenges that lie ahead of him.

The Gators still have plenty of young talent on both sides of the pool.

Junior Stanley Wu, freshman Michael Taylor and sophomore Maxime Rooney are just a few of the promising swimmers left on the men’s side.

Despite the Gators losing some serious talent in the pool, they’ve made two wise choices in regards to their coaching vacancies. Troy’s 20-year tenure was one of the most successful across school history, so his should were always going to be a tough pair to fill.

In Jeff Popell and Anthony Nesty, the Gators have promoted two promising young coaches. While Troy’s act will be a tough one to follow, Florida will now turn to two familiar faces in the hopes of taking both both swimming and diving programs to new heights.