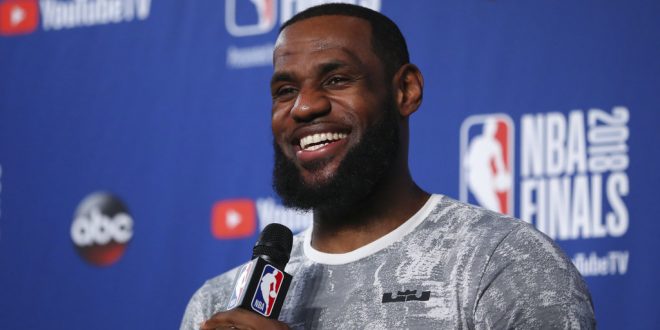 Cleveland Cavaliers forward LeBron James takes questions at a press conference after the basketball team's practiced during the NBA Finals, Thursday, June 7, 2018, in Cleveland. The Warriors lead the series 3-0 with Game 4 on Friday. (AP Photo/Carlos Osorio)

The Cleveland Cavaliers are in an unfavorable position. Game 4 of the NBA Finals is an all-or-nothing situation in Cleveland. The Golden State Warriors, however, look for history. The Warriors will look to be the only team to sweep LeBron James in an NBA Finals series since the 2006-2007 San Antonio Spurs.

Does the Season End Tonight?

The Cavaliers organization is preparing for their toughest test in Game 4. Down 0-3, the team’s gameplan must be a near-perfect solution to the Warriors’ puzzle. Head coach Tyronne Lue feels that they are ready to keep their championship hopes alive, and likes their chances.

After receiving some help, James is preparing to lay it all on the line for a win in this series. Leading the team in points, assists and steals in the postseason, he will need another legendary performance to push the series one game longer.

.@KingJames talks on the importance of playing a full 48 minutes, and looks ahead to another opportunity to dial in on Friday.#WhateverItTakes pic.twitter.com/pum6YU6Scq

Secondly for Cleveland, if they can avoid the third-quarter rush from Golden State and weather the storm, they could have success tonight. Across the previous three games, the third quarter has been the team’s weakness, giving up more points to Golden State than any other quarter. In Game 3, the Cavs would give up 31 points, giving Golden State the lead that they never took back.

The final key for Cleveland will be to play unbreakable defense. The team would shut down Stephen Curry from behind the line, keeping him at bay with a 1-for-10 three-point ratio. If the team can shut down the team’s best shooter, and avoid another 43-point performance from Kevin Durant, the Cavs may very well secure a victory at home tonight.

Golden State is riding a wave of confidence and momentum right back into Cleveland. After the video game-like performance of Durant, they look to develop an iron-clad gameplan against a desperate Cleveland team looking to secure a W.

Firstly for the Warriors, making more field goals than they did in Game 3 will be critical. Going 42-for-81 in Game 3, their 51.9 percent must improve, as Cleveland was only eight percent lower.

The long game for Golden State will also come in the form of Curry. Dubbed “the best shooter in the NBA”, he cannot get shut down behind the arc.After breaking the NBA Finals record for triples, Cleveland locked him down. The lack of production in Game 3 could contribute to the Cavs being within striking distance of the win.

Durant believes that Golden State knows exactly what to do in order to cash-in on another championship ring for the bay.

Curry is preparing to have the performance of a lifetime in Game 4. His third championship in four years will hanging in the balance in Cleveland.

In potentially the final game of the NBA season, the Cavs look to get their first win and build momentum. Tipoff for the clash is at 9 p.m., and the game will take place at the Quicken Loans Arena in Cleveland, Ohio. The Cavaliers will look to take the series to Oakland for Game 5.