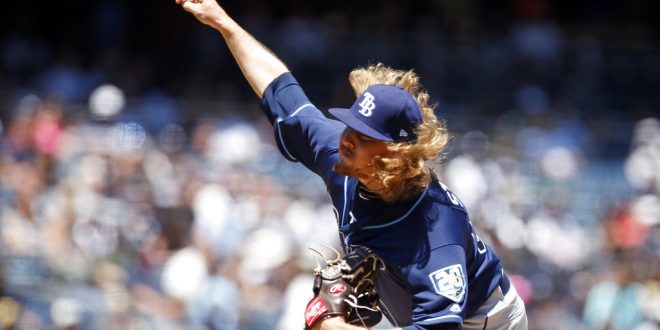 The seasons between the Tampa Bay Rays and the New York Yankees are tales of two completely different stories. On one hand, there is the team with the best record in baseball in the Yankees (50-22). On the other hand, you have a team six games under .500 and struggling to keep their heads above water in the Rays (34-40).

The Rays will look to turn their luck around, but they will have their hands full with the red-hot Yankees riding into Tampa.

The Rays, who have lost five of their past seven games, are coming off their second straight series loss, falling to the Houston Astros in two of three games played in Houston.

The Rays will send right-hander Ryne Stanek to the mound on their “bullpen day,” in which a committee of relievers will pitch throughout the game in order to reserve energy of their starters throughout the grueling 162 game season.

Stanek, who is 1-1 with a 2.21 ERA, isn’t expected to pitch deep into the game, but he has seen plenty of success in June. Since the month began, Stanek has had eight appearances and has not given up a run in 10 2/3 innings. This includes a start he had against the Yankees last weekend , where he went 1 1/3 innings without giving up a run.

Stanek’s counterpart will be Yankees’ righty C.C. Sabathia, who is 4-2 on the season with a 3.30 ERA.

The veteran pitcher has thrown against the Rays 46 times, going 16-15 in his career against Tampa. Most recently, Sabathia took the loss against Tampa Bay, despite pitching eighth inning. In last Sunday’s matchup, Sabathia struck out 10 batters and walked only one. However, he also gave up three runs on a season-high 10 hits given up, leading to a 3-1 loss for the Yankees.

Still took home the series win. Now we've got some business to take care of in DC tomorrow. pic.twitter.com/v4N3sDbUv1

For the Rays, third Baseman Matt Duffy has swung a hot bat as of late. In the past week, Duffy has a .333 batting average with two doubles, a home run, and three RBI’s. On the season, Duffy has been the Rays most reliable hitter, batting with a .317 average, four home runs, and .799 OPS.

For the Yankees, Giancarlo Stanton has been on a tear since his slow start to the season. In the last seven days, Stanton has mashed three home runs to go along with a seven RBI’s, a .346 batting average, and 1.131 OPS. Included in his three home runs on the week was a two-run bomb to left-center field to walk-off against the Seattle Mariners.

The Rays and Yankees will begin a three game series tonight at 7:10. in Tampa.