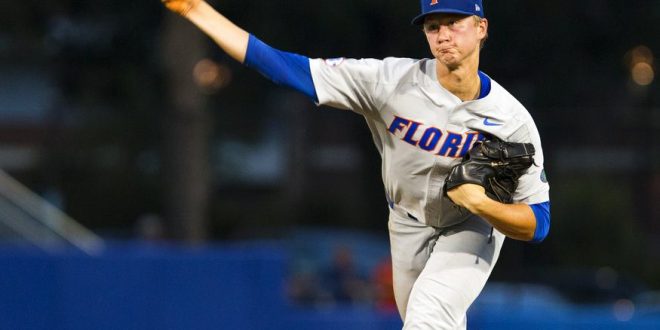 After winning back-to-back elimination games, the Florida Gators find themselves with their backs against the wall once again.

This time the Gators will have Brady Singer on the bump. The ace will be going up against the Arkansas Razorbacks who have yet to lose a game in Omaha.

Time For The Ace to Perform

Singer suffered only his 2nd loss of the season in the CWS opener against Texas Tech as he gave up nine hits and five runs.

The right hander’s first loss of the season actually came at the hands of the Razorbacks back in March. He gave up six runs, including two home runs, over seven innings. Singer will have to bring his A-game because the Arkansas bats are on fire.

The Razorbacks are hitting .360 in Omaha, including three home runs.

How the Razorbacks Got Here

Arkansas hasn’t had the most difficult time in Omaha so far as they are a perfect 2-0.

The winners bracket has treated the Razorbacks great as they have won soundly in both games. They defeated Texas 11-4 in the opening game and then defeated Texas Tech 7-4.

Although the entire Arkansas lineup can do major damage, the man Singer has to worry about the most will be Dominic Fletcher.

Fletcher has been scorching ever since he stepped foot in Omaha as he is hitting .667 in two games. The center fielder is 6 for 9 with six RBIs and a home run.

Florida will be seeing a familiar foe on the mound on Friday night as the Razorbacks are handing the ball to redshirt sophomore Isaiah Campbell. The Gators knocked Campbell around the first time they faced him as he only lasted one inning in a 17-2 UF win.

The match-up between the Gators and Razorbacks will be primetime television as ESPN will show a live telecast at 8 p.m. A radio broadcast will also be available on the Gators IMG Sports Network.

It's a quick turnaround for the defending national champions as @GatorsBB faces off against @RazorbackBSB. Brady Singer is expected to make another #CWS appearance from the mound. Tune in tonight to hear Steve and Jeff on the call beginning at 7:50. pic.twitter.com/sBdMueuqxl