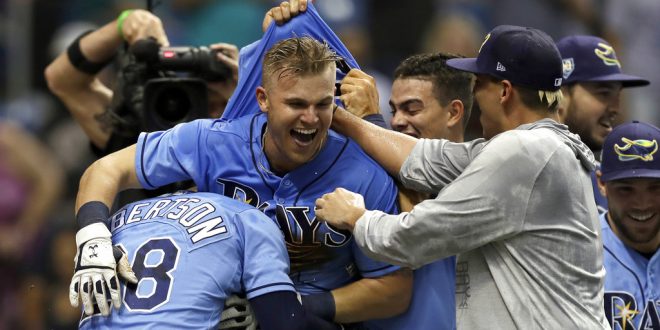 After returning home for a weekend series, the Tampa Bay Rays would sweep the New York Yankees, including one shutout.

Shutting Out the Stripes

Firstly, the Rays would enter the second matchup of the series against the Yankees with momentum. The victory on Friday night came after Daniel Robertson and Matt Duffy would run the bases for Tampa Bay. Despite Gleyber Torres scoring for New York, they were not able to answer back, resulting in a 2-1 victory for the Rays.

Bullpen locked it down, three more hits for Ramos. #RaysWin

Tampa Bay would total two runs with three hits and zero errors. C.J. Cron would get a double to the left, and scored for the Rays after Robertson was able to double deep to left-center. Mallex Smith would sacrifice a fly-ball to send Robertson to third. Willy Adames singled to left, resulting in a run score for Robertson, bringing the lead up to 3-0.

The final score of the game would come in the bottom of the seventh. Adames would step to the plate and hit a 355-foot home run to extend the lead to 4-0, and shut down the Yankees for the game.

Tampa Bay was looking for the sweep after securing the series win over the weekend.

Following a close win and a shutout, New York was looking to respond big in the series finale. The final game of the series would be a high-scoring affair, featuring a number of big moments.

After a quiet top of the first, the Rays made an impact in the bottom of the inning. Hitting a triple in his first at-bat, Kiermaier scored for Tampa Bay, following a Duffy double to the right. Carlos Gomez secured a double of his own, resulting in a score for Duffy. The Yankees would answer back, as Miguel Andujar would hit a 401-foot homer. As a result, Andujar would score, along with Giancarlo Stanton and Aaron Hicks, bringing the Yankees up 3-2.

Jake Bauers would make an impact in the third, hitting a triple to deep center, before scoring on a single from Gomez. Smith and Gomez would be on bases, with Jesus Sucre nabbing a double after. Gomez and Smith would take advantage, bringing the Tampa Bay Rays up 6-3 over New York.

New York would once again get in striking distance, following scores from Brett Gardner and Didi Gregorious in the top of the fifth. In the top of the eighth, former Miami Marlins star Giancarlo Stanton would bomb a 364-foot home run to tie the game at 6-6. The action would die down, sending the game to extra innings in St. Petersburg.

The moment of the game would not come until the bottom of the 12th inning, when Bauers would crush a 420-foot home run to the stands in center field, securing the series and the victory at 7-6. The total score for this series, which went 30 innings, would total 13-7 across all three games.

What’s Next for Tampa Bay?

As the Rays look to take in the sweep, there will be no rest for the weary. The Rays return to Tropicana Field in St. Petersburg, Florida for a Monday matchup against the Washington Nationals. This will begin a two-game series between the teams, with game one beginning Monday night, beginning at 7:10 p.m. Game two between the Tampa Bay Rays and Nationals will feature an early-afternoon start of 12:10 p.m.