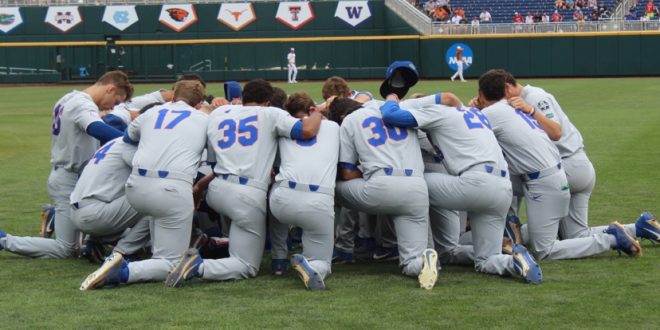 The Florida Gators baseball season has come to an end as the Arkansas Razorbacks beat them 5-2 in the College World Series.  Despite Brady Singer starting on the mound tonight and freshman Tommy Mace only giving up one run over four innings in relief, the Gators were unable to make a come back.

Florida lost game one in the tournament to Texas Tech. Then they had to beat Texas and rematch Texas Tech to make it to the semifinals. Since Florida was in the loser’s bracket, they were going to have to beat the Hogs twice to advance to the series final.

Though, the Gators should hold their heads high after an impressive run. The team lost quite a few starters to the 2017 draft, so the 2018 Gators surpassed expectations. The team finished with a 49-21 overall record. They also were the SEC Regular Season Champions with a 20-10 conference record.

Proud of @GatorsBB players, coaches and staff on another remarkable year. Any time you win the @SEC championship and end the season in Omaha, it’s a special year. #CWS #GoGators

What Gave The Hogs an Edge

Starting on the mound for Arkansas was Isiah Campbell, who struck out eight of the 20 batters he faced over five and 2/3 innings. Another break out player for the Hogs was Casey Martin, who was responsible for three of the Hogs’ five runs.

In the first inning, Casey Martin (Ark) singled through the left side. After advancing to second, Luke Bonfield singled to CF scoring Martin.

In the third, Martin singled to LF, then Heston Kjerstad reach on an error, and Martin advanced to second. Dominic Fletcher then singled to RF scoring Martin.

Martin did it again! In the fifth, Martin hit a double down the LF line. Kjerstad grounded out, but it advanced Martin. Then, Bonfield grounded out to thirdrd and Martin scored. Then, Flether hit a home run over RF. The score was 4-0 ARK.

The Gators’ bats woke up in bottom of the fifth. Austin Langworthy singled to CF. Blake Reese was hit by pitch. Brady Smith singled to CF, scoring Langworthy. Then, Reese scored on a wild pitch, making the game 4-2 ARK.

Before heading back to the locker room, some of the players took the time to thank their fans and sign autographs.

In his post-game interview, an emotional Florida head coach Kevin O’Sullivan brought his equally emotional daughter to the stand for comfort.

O’Sullivan said, “We battled. And unfortunately, there’s only one team that’s going to move on, and that’s Arkansas from our bracket. But I couldn’t be more proud of our team. It was obviously the disappointment on their faces when the last out was made, it was not easy. But awfully proud of the way they played this year, their careers, and I know there’s a lot of disappointment right now.”

He also talked very highly of team captain, JJ Schwarz, who was one of two seniors on the teams and also junior pitcher, Brady Singer. O’Sullivan said, “I think JJ broke the all-time games played at Florida. He surpassed Preston Tucker, and obviously Brady is going to go down as one of the best pitchers who ever put on a Gator uniform.”

O’Sullivan thinks Gators fans can look forward to next year, “We’ve got a lot of good players coming back. Good recruiting class. And we’ve created something really special here at Florida. And the next couple days will not be easy, but certainly proud of them, the way they handled themselves both on and off the field. It obviously goes a lot deeper than wins or losses.”

For the Hogs, they’ll be back in action on Monday, as they face the winner of the Oregon State/Mississippi State game at 6 p.m. on ESPN.