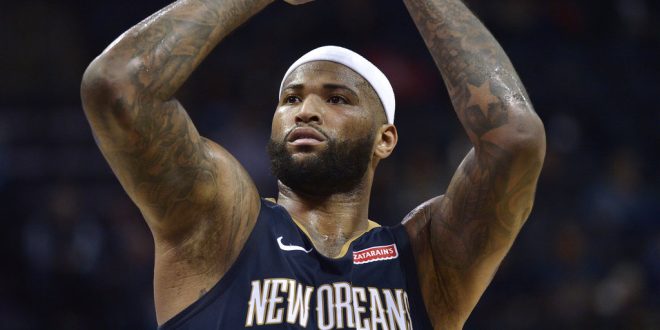 FILE - In this Jan. 10, 2018 file photo New Orleans Pelicans center DeMarcus Cousins (0) shoots a free throw in the first half of an NBA basketball game against the Memphis Grizzlies in Memphis, Tenn. Cousins will be ready to play at some point this season. And when he is, the two-time defending NBA champions will be waiting. Adding a fifth All-Star to their already glitzy lineup, the Golden State Warriors have come to terms with Cousins on a one-year, $5.3 million deal _ not the biggest money move on Day 2 of the NBA Free Agency period, but the most intriguing. (AP Photo/Brandon Dill, file)

It’s hard to think of any free agency period in sports that is as entertaining as the NBA’s.

After LeBron James’s big money move to the Los Angeles Lakers, some big dominoes were bound to fall afterwards.

The Warriors possibly became unbeatable, the Lakers continued to fill out their roster around LeBron, and others made signings they hope improve their chances for next season.

Boogie to the Bay Area

The defending champions somehow managed to get even better and add another all-star in big man Demarcus Cousins.

Cousins heads to Golden State on a one year, $5.3 million deal that gives him a chance to chase a ring and earn himself a big contract in the summer of 2019’s free agency period.

"There were teams with [salary cap] space that did not want [DeMarcus Cousins] in their locker room – did not want him in their organization. … This gives him a chance to prove those things to people in Golden State." —@wojespn pic.twitter.com/hfGfWB6vlD

The signing fills the only perceived weakness on Golden State, the center position, with an all-star and arguably one of the best bigs in the game. Steve Kerr can now put up a lineup that would resemble a Western Conference All-Star lineup.

Cousins is coming off an achilles injury that will keep him out for the start of the season, which might explain the lack of a market he had. Still, when on the court, Cousins is force to be reckoned with, averaging 25.2 points and 12.9 rebounds in 48 games played for New Orleans last season.

Plenty of other teams dipped into the free-agent market yesterday as well.

The Lakers continued their splurge by signing point guard Rajon Rondo to a one-year deal worth $9 million.

Gone from the Lakers though is forward Julius Randle. Los Angeles renounced their rights to Randle, allowing him to sign with Cousins’s former team, the Pelicans, on a two-year, $18 million deal.

Staying in LA, but with the Clippers, will be Avery Bradley, who signed a two-year deal.