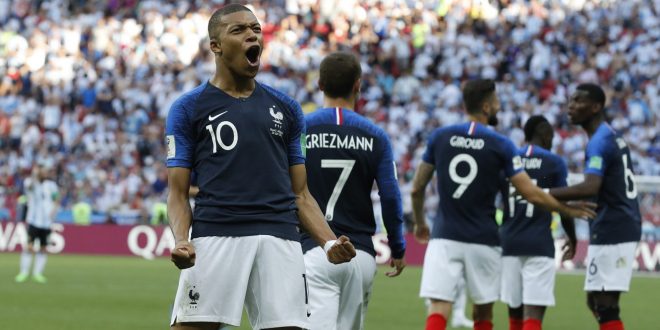 France's Kylian Mbappe celebrates after scoring his side's third goal during the round of 16 match between France and Argentina, at the 2018 soccer World Cup at the Kazan Arena in Kazan, Russia, Saturday, June 30, 2018. (AP Photo/David Vincent)

Two days without any World Cup matches feels like an eternity.

For the first time since the tournament began, soccer fans have had to wait more than 48 hours for matches. Queue Friday’s mouthwatering slate of games.

Uruguay clashes with France at 10 a.m., and Brazil will prepare for a heavyweight bout against Belgium at 2 p.m.

The two winners of Friday’s matches will go on to play each other on Tuesday at 2 p.m. ET.

Both squads are coming off the heels of arguably their most impressive matches of the tournament.

France’s attacking talent was on full display when they eliminated Lionel Messi and Argentina, 4-3, last Saturday.

Meanwhile, a brace from Edinson Cavani proved to be the difference for Uruguay against Cristiano Ronaldo‘s Portuguese side, as La Celeste edged Portugal, 2-1, on the same night.

Cavani came off injured in the latter stages of that match, and his status is a big question mark for Óscar Tabárez‘s side heading into the quarterfinals.

If Cavani is absent for Uruguay, it will place added pressure on Luis Suarez, to get La Celeste on the scoresheet.

Cavani spoke about Uruguay’s World Cup through a translator after the win against Portugal.

The midfield battle will also be a key factor in this match. France employs one of the best midfield pairs in Paul Pogba and N’Golo Kanté.

Pogba was especially effective against Argentina. He drove forward and linked play between France’s midfield and their attackers.

Uruguay’s young midfield contingency of Rodrigo Betancur and Lucas Torreira will need to hold their own, albeit as they’ve done for most of the tournament, against some of the world’s best if Uruguay hope to advance.

Friday’s second match of the day will see tournament favorites, Brazil, take on Roberto Martinez‘s exciting and explosive Belgian side.

Belgium overcome a real scare, 3-2, against a quality Japanese side in their Round of 16 matchup. It was Belgium that found themselves down 0-2 in the 52nd minute after two surprising goals from Japan.

Who saw this coming?!

Inui hits a rocket from outside the box to put Japan up 2-0 on Belgium! 🇯🇵 pic.twitter.com/Bw2famzZiR

Defender Jan Vertonghen and substitute Marouane Fellaine both brought goals back for Belgium before fellow substitute, Nacer Chadli, capped Belgium’s win with a goal following a beautiful counterattack in the dying moments of the match.

While Belgium weren’t dominant from start to finish, the match against Japan definitely handed them a proper test before their clash with Brazil.

Following yet another assured performance from Brazil against Mexico in the Round of 16 (2-0), Tite‘s side has appeared to be in cruise control almost all tournament.

But Belgium will be no easy task to handle, and they represent Brazil’s toughest opponent faced thus far.

The fight for possession of the ball will be interesting to watch, as both team’s playmakers want to get on the ball and dictate play.

Belgium’s playmakers, Kevin De Bruyne, Eden Hazard and Dries Mertens, will need to be a bit more crisp on the ball against Brazil’s combative midfield of Casemiro and Paulinho.

Both Brazilians excel at breaking up play and springing the ball forward. Belgium will need to be wary against Brazil’s counterattack– an issue they had against Japan.

Philippe Coutinho and Neymar continue to be one of the most dangerous attacking players of the tournament. Brazil has also gotten big contributions from the likes of Willian and Roberto Firmino.

A defense that has only conceded one goal, anchored by center back PSG’s Thiago Silva, will also not be easy for Belgium to crack.

Sports media and management student at the University of Florida. Content creator for ESPN 98.1 FM/ 850 AM WRUF.
@TheEdgarChavero
Previous From the Gators to the Reds: Jonathan India Signs with Cincinnati
Next Gators Bullpen Ace Michael Byrne Signs Major League Contract 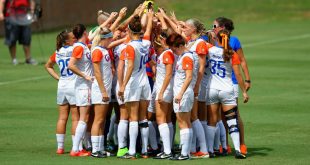