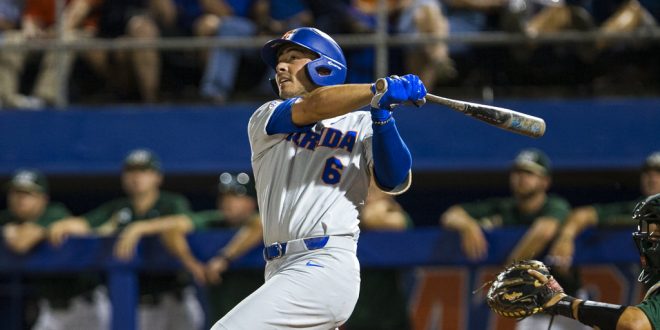 From the Gators to the Reds: Jonathan India Signs with Cincinnati

Just under a couple of weeks ago, Jonathan India was playing in the College World Series for the Florida Gators. Although one chapter closed that night as the Gators lost 5-2 against Arkansas, another chapter began for India 11 days later.

This past Tuesday, the former third baseman received a $5.3 million signing bonus from the Cincinnati Reds. India will potentially join fellow Gators teammate Michael Byrne in Cincinnati, who got a $260,000 bonus from the organization.

Recapping his time with Florida

India finished his college career with a .310 batting average, 208 hits and 31 homeruns for the Gators in 194 games. Despite collecting multiple accolades in his three years at Florida, none of them could top the program’s 2017 College World Series win.

During an interview on Sport Scene with Steve Russell, India talked about his time at the school and the team’s championship run last year.

The transition from college to the minor leagues will be an adjustment, but India feels prepared for the next step in his career. The fifth overall pick in the 2018 MLB Draft said his time in the Southeastern Conference gave him good competition to face off against.

The Road to the Show

In college, India primarily played third baseman, but he will be tasked with other responsibilities in his pro career. India, who is slated to report to the Reds’ minor league team this week, will be playing numerous positions within the infield .

On the day he inked his deal with the Reds, India was at the Great American Ball Park for the Reds’ game against the Chicago White Sox. For India, who was also in the booth with the team’s commentators, stepping onto the diamond was a memorable experience for the 21-year-old.

While Byrne is reporting to Class A-Advanced Daytona, India will be heading to the Appalachian League to play for the Reds’ minor league team in Greeneville, Tennessee.