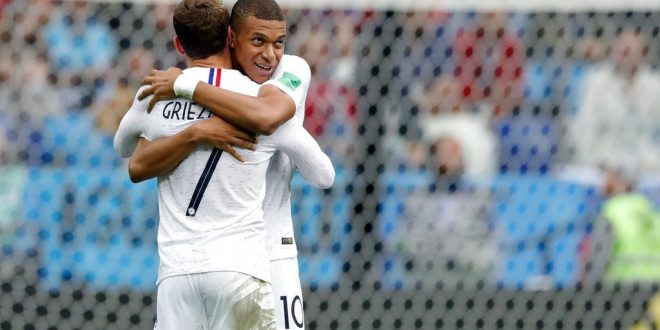 Arguably the two most exciting and complete teams so far in Russia 2018 meet Tuesday in Saint Petersburg for a tantalizing semifinal.

The French came in as one of the heavy favorites, and have grown into the tournament, with impressive knockout stage performances against South American sides Argentina and Uruguay.

Belgium on the other hand have won every game they’ve played this tournament in 90 minutes, finally living up to the dark horse billing they’ve seemingly carried since Brazil 2014. They’re coming off a thrilling, last minute win over Japan in the Round of 16 and an equally exhilarating 2-1 upset of Brazil in the quarterfinals.

France’s only World Cup triumph came at home in 1998, and have only been in one other final (a loss to Italy in penalties in 2006). Belgium have never reached the final, with their only other semifinal appearance in Mexico ’86.

In other words, the winner of this match will be just one match away from achieving something truly historic.

A common saying in world football is that the games are won and lost in midfield. While that is mostly true, this match will come down to who can take advantage of the wide spaces in behind the other team’s defense.

France’s talisman this tournament has been 19-year old PSG winger Kylian Mbappe. The youngster has been the breakout star of the tournament with three goals, including two in a rampaging performance in the 4-3 win over Argentina.

Mbappe slots out right, and has caused havoc all tournament long with his movement and pace. He can run at defenders and take the ball to the byline for dangerous cut-backs, or drift inside play intricate link ups in tight spaces with Antoine Griezmann and Olivier Giroud.

His biggest threat is on the counter-attack though, where he’s like a one-man fast break in basketball. He’s arguably the fastest player left in the field, and his world class speed was shown in a 60 yard solo run that set up France’s first goal from the penalty spot against Argentina.

He should have plenty of chances to run at Belgium’s slower back three and will be a real menace all game long.

By the same token though, the Red Devils will have their chances out wide as well. With France likely on the front foot, Belgium will have chances to break, which they’ve shown to do masterfully against Japan and Brazil.

French right back Benjamin Pavard loves to boost forward, and if Belgium can catch Les Blues in possession, it could force extra pressure on N’Golo Kante to track back and cover the exposed area. The fluidity of Belgium’s front three of Hazard, De Bruyne, and Lukaku, and their ability to interchange positioning in the attack third could confuse the French defense and lead open layoffs out wide, as evidenced by Belgium’s stoppage time winner against Japan.

As seen above, both teams pose real danger going forward, especially on the counter. That means that the roles of each team’s holding midfielders will be ever more important.

France possess arguably the tournament’s best midfield pivot in Kante and Paul Pogba. Kante is probably the top midfield destroyer in the world, making tackles and covering ground like no one else. This gives Pogba more free reign to make boosting runs from midfield, where he can pick out a pass, make defenders miss, or make delayed runs into the box.

Kante’s ability to cover for Pogba and forward runs from the full-backs will be tested against Belgium. If Kante ends up needing more support, Pogba will be forced to play more defensively, drawing a body out of the French attack.

On the flip side, Belgium’s midfield pivot has changed from what it started the tournament as. To start, Axel Witsel and De Bruyne started out there, with Witsel carrying more defensive responsibilities with De Bruyne acting more as a deep lying playmaker.

For the Brazil game though, Belgium manager pushed De Bruyne into the forward three, while bringing on the enigmatic Marouane Fellaini into the midfield pivot. This gave Belgium more defensive solidity against an imposing Brazilian attack, with Brazil only managing a breakthrough late in the game already down 2-0. It also gave Belgium’s main playmaker more of a creative license in the attacking third, where he found a thunderbolt of a strike for Belgium’s second goal of the game.

This balance between attack and defense in midfield will be interesting to watch, especially if the game goes to extra time, where tired legs and substitutions can alter the tactics of the game.