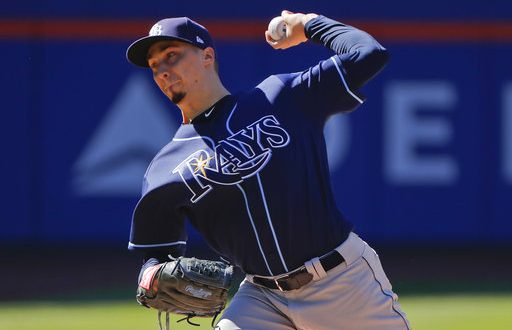 The MLB revealed its 2018 All-Star Game teams on Sunday night.

Firstly, two players from teams in Florida made the cut: Miami Marlins catcher J.T. Realmuto and Tampa Bay Rays catcher Wilson Ramos. Realmuto is batting .317 thus far this season and is a reserve for the NL. The catcher carries 44 RBIs and 12 homers.

You ain't ready for him, @AllStarGame.

On the other side, Ramos leads the Rays with 47 RBIs, 12 home runs on the year and is hitting .289. Ramos will be the starting catcher for the AL.

Snell leads the AL with an ERA of 2.09. Furthermore, he has a 12-4 record for a less-than-impressive Rays team in the AL East. The pitcher is tied for second in the MLB in wins with 12, tied for third in opponent batting average at .183 and has 132 strikeouts so far.

Blake Snell is the only pitcher in 17 years to lead the AL in ERA in the first half and not be an All-Star. The last player to accomplish this: Pedro Martinez.

Me trying to figure out how is Blake Snell not an All-Star? HOW???? @snellzilla11 pic.twitter.com/DeGXg1LezZ

These weren’t the only tweets. One needs only type in “Blake Snell” to Twitter and they would see the outcry of support over the snub. Snell is 8-1 in his last 10 starts with a 1.27 ERA.

Other MLB players, coaches and managers select the pitchers on both All-Star rosters, with five starters and three relievers.

Not all players appreciate the peer vote because it is done early in advance. Houston Astros pitcher and All-Star participant Justin Verlander responded to Snell’s snub.

Also, because we vote waaay too early. Could easily punch in our votes on an iPad a couple days before instead of the old school envelope weeks before.

It is highly likely that Snell makes the team as a reserve or injury replacement. Regardless, he remains one of the more memorable snubs in recent history.

Luis Severino, Verlander, Gerrit Cole, Chris Sale and Corey Kluber are the five pitchers that made the AL All-Star lineup. Although all of them deservingly got the nod, it nonetheless remains a surprise that Snell didn’t.

Chris O'Brien is a rising sophomore at the University of Florida. He aspires to be an on-air sports anchor someday.
Previous Tampa Bay Rays Look to Extend Win Streak in Series Against Detroit Tigers
Next FIFA World Cup Preview: Rivals France and Belgium Meet in Thrilling Semifinal