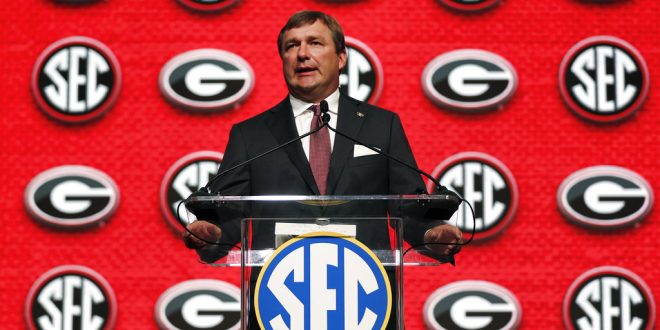 Kirby Smart may have lost in the National Championship just over six months ago, but that hasn’t stopped his enthusiasm for this upcoming season.

While being accompanied by three upperclassmen, the Bulldogs head coach was in Atlanta, Georgia, on Tuesday for SEC Media Days.

Smart discussed how his staff has moved on from the title game, his team’s leadership and their situation at a couple of key positions.

Focusing on the future, not the past

Although his team lost to Alabama by three points in the championship, Smart knows more work needs to be done. Smart, who spent nine years as a coach with the Crimson Tide, seems to be taking a Nick Saban-like approach to this year.

With the accomplishments of last season comes expectations for Georgia to not only repeat as SEC East champions, but to win the College Football Playoff. Smart said that his team and his staff needs to embrace the pressure that comes with coaching and playing for the program:

“Pressure is really a privilege. You should feel privileged to have pressure to win games.”#ATD #SECMediaDays pic.twitter.com/4wZOXtE7KS

Players who are stepping up as leaders

With the loss of players like Bradley Chubb, Nick Chubb and Sony Michel to the NFL, Smart is looking for people to take on new leadership roles.

The third-year head coach pointed to senior wide receiver Terry Goodwin as someone who has stepped up as a leader, specifically with his position group. Smart also cited Mecole Hardman, Riley Ridley and Jayson Stanely as players who have stood out to him.

Quarterback and running back situations

Although Jacob Eason transferred to Washington earlier this year, Smart has confidence in the group of quarterbacks on his roster. Smart has been impressed with what he has seen from freshman Justin Fields and sophomore Jake Fromm, who recently suffered an injury to his non-throwing hand.

“With our situation, we have two quarterbacks who are both really talented guys,” Smart said. “I am really excited about watching these two guys come out and lead our program and lead their units. They both have grown. They both have done a tremendous job of embracing that role; not only in the locker room, but out on the field and in spring practice. I think Jake and Justin are tremendous assets for our program.”

When it comes to how Georgia can replace Chubb and Michele’s production from last year, Smart said he is hoping experience will help his running backs. Smart mentioned D’Andre Smith, Elijah Holyfield and Brian Herrien as three players who will have to fill the void.

“I’ve seen enough to know they got ability,” Smart said. “Those guys, they got a lot of carries last spring when Nick and Sony weren’t carrying it. They got a lot of carries this spring, so I’ve seen what they can do. It’s a matter of can they put it all together in pass protection, leadership and help with the offensive line the same way Sony and Nick helped inspire those guys.”

What’s next for the Bulldogs?

Georgia will open up the regular season at home on September 1st when they play Austin Peay State University. They will meet the Florida Gators on October 27th for a neutral-site game in Jacksonville, Florida.

Previous Both Teams Flex Their Muscle As AL Outlasts NL In MLB All-Star Game
Next British Open Preview: The Contest Returns to Carnoustie