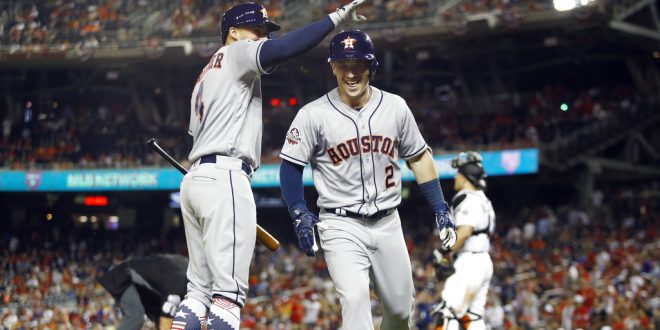 The 89th MLB All-Star Game took place in the nation’s capital on Tuesday night, and although the fourth of July was two weeks ago now, there certainly were plenty of fireworks on display in this one.

Houston Astros’ teammates Alex Bregman and George Springer hit back-to-back home runs off Dodgers pitcher Ross Stripling in the top of the 10th inning to help give the American League its sixth straight All-Star Game win as it would go on to defeat the National League, 8-6, in 10 innings.

This MLB Midsummer Classic was different from those of its past. The two teams combined for 10 home runs in the game, breaking the former record of six for most home runs in an All-Star Game.

Although the American League got the better of the National League on the scoreboard, the NL matched the AL five to five in home runs.

The previous #AllStarGame HR record was six. There were TEN tonight. pic.twitter.com/cNCfySChhH

The National League would go on to have five players hit them over the fence.

Cincinnati Reds second baseman Scooter Gennett tied the game, 5-5, in the bottom of the ninth when he connected on a pitch from Mariners closer Edwin Diaz and sent it into the bullpen in right.

Gennett’s teammate Joey Votto was among the group of National League players who also went yard, hitting a solo shot in the bottom of the 10th.

The American League had its fair share of home runs on Tuesday night as well.

Most notably, the Houston teammates Alex Bregman and George Springer hit back-to-back jacks in the top-half of the 10th inning, giving the AL an 8-5 lead.

Yankees right fielder Aaron Judge connected off of Max Scherzer early in the game, giving the American League an early 1-0 lead. Angels center fielder Mike Trout followed up Judge’s homer with his own in the third inning to balloon the AL lead to 2-0.

Lastly for the AL, Mariners shortstop Jean Segura tee’d off on Brewers pitcher Joe Hader in the eighth inning, plating three runs to give the American League All-Stars a 5-2 lead at the time.

In the Astros’ third baseman’s first All-Star Game, Alex Bregman got a hold of a Ross Stripling pitch in the top of the 10th inning and gave the AL a lead it wouldn’t give up, beating the NL, 8-6, in extra innings.

The play was considered substantial enough for Bregman to be honored as the All-Star Game’s MVP.

In an interview with ESPN, Bregman described the plate appearance. “I took a cutter down the middle first pitch, then kind of went into battle mode and was just trying to put a line drive in play and it left the yard. It was crazy. A lot of fun,” Bregman said.

The American League continued its recent dominance of the National League on Tuesday night. In the last 30 All-Star games, the AL is 25-4-1 against the NL.

Mariners closer Edwin Diaz picked up the win for the AL, while Dodgers reliever Ross Stripling was handed the loss.

Blue Jays pitcher J.A. Happ was given credit for the save.