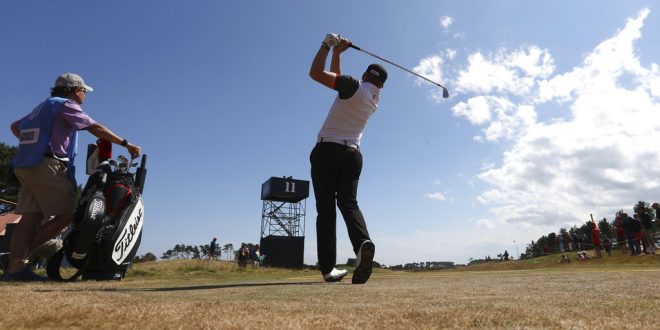 Haraldur Magnus of Iceland plays from the 11th tee during a practice round ahead of the British Open Golf Championship in Carnoustie, Scotland, Wednesday July 18, 2018. (AP Photo/Jon Super)

It might not have worked out in soccer, but tomorrow, golf is coming home.

After an 11-year absence, the 147th British Open returns to Scotland, bringing 156 of the world’s finest golfers to the Carnoustie Championship Course.

Action on the fairway starts at 1:35 a.m. Thursday, when Sandy Lyle, Martin Kaymer and Andy Sullivan are scheduled to enter the tee box. Looking for a later start to your day? Here’s a quick primer on what to expect across the pond.

Making just its eighth appearance as the host of the British Open, the Carnoustie Golf Links Championship Course is among the most storied in the sport. Built in 1842, the Scottish venue is one of the oldest in the world.

It’s also notoriously difficult. Despite not hosting The Open since 2007, Carnoustie’s reputation precedes itself.

According to an article published by Golfweek, the Carnoustie course is considered the most difficult of the 10-course rota that hosts The Open. Crater-like bunkers and shaggy rough mar the infamous course, one that’s made professional golfers look like weekend warriors.

It’s repute was solidified in 1999, when eventual winner Paul Lawrie clinched The Open with a score of six-over.

“I remember seeing Sergio (Garcia) crying, that’s how hard it was,” English golfer David Howell told Golfweek. “That finish is the toughest in the world. If 15, 16 and 18 are into the wind, then it’s brutal, and by the time you get to that last four holes you’re already drained.”

The Open may start in just a few hours, but opinion is still divided on who will walk away with the Claret Jug.

Still others vary on who to watch: Bookies at the UK’s Daily Mail hold course record-holder Tommy Fleetwood (22-1), 36-year-old Swede Alex Norén (33-1) and 2016 Open champion Henrik Stenson (33-1) in high regard heading into the weekend.

However, British fans will probably be hoping for the same thing — an English or Scottish victory.

No Englishman has won The Open since Nick Faldo managed the feat in 1992. Scotland’s dry spell stretches nearly as long: Lawrie’s 1999 victory at “Car-nasty” remains the last time a Scot won the British Open.

Will both countries have to wait another year?