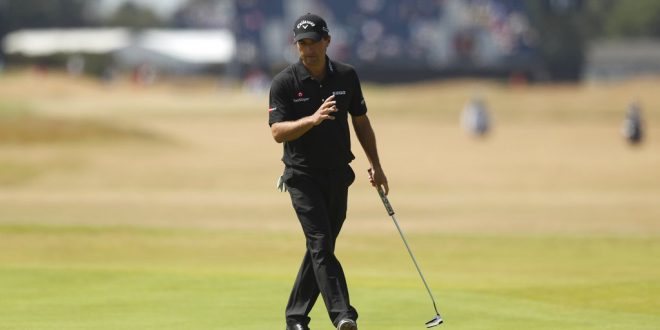 Kevin Kisner of the US putts on the 18th green during the first round of the British Open Golf Championship in Carnoustie, Scotland, Thursday July 19, 2018. (AP Photo/Jon Super)

Kisner Leads The Open Championship After Day One at Five-Under, Woods Shoots Even

The first round of The Open Championship wrapped up on Thursday. Kevin Kisner is in the lead at five-under after shooting a 66.

Zack Johnson, Rory McIlroy and all are two-under. Tiger Woods shot even par after starting off two-under through the first four holes.

Spieth was sitting on the 15th tee box looking like he may finish on the top of the leaderboard. He double-bogeyed 15th and bogeyed 16 and 18.

After finishing third in the Masters this year, he’s missed the cuts in three out of the seven following events. He blamed the fall on a mental mistake on 15, where he had a tough time with the rough.

“I just had a brain fart, and I missed it into the location where the only pot bunker where I could actually get in trouble, and it plugged deep into it,” Spieth said. “It was a really, really poor decision on the second shot, and that cost me.”

Woods woke up with neck stiffness and wearing kinesio tape. It stirred up fans and media but he started off hot, with those two birdies through four.

-2 thru 4.@TigerWoods is already inside the top 10 at #TheOpen.#LiveUnderPar pic.twitter.com/nBGdIn2MmH

He was two-under through 11, but bogeyed 13 and 15. It was a pretty good day overall for Woods, who is still in the thick of it.

McIlroy, Johnson and Thomas are the big names at two-under, but Erik van Rooyen, Tony Finau and Zander Lombard are in second at four-under.

Justin Rose, who played with Spieth, is also one-over and the favorite to win, Dustin Johnson had a rough day and went five-over. He was even through seven before four bogeys, one double bogey and a birdie over his last 11 holes, placing him in the back of the field. Phil Mickelson is two-over and Bubba Watson is four-over par.