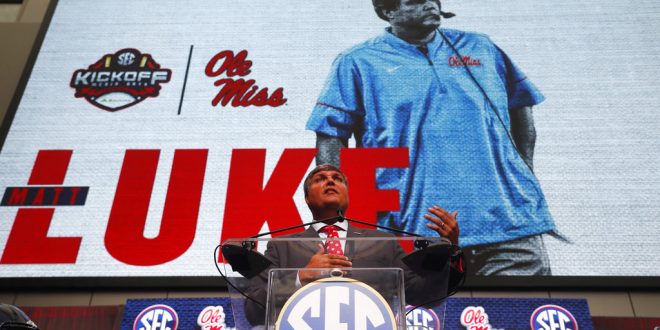 For Matt Luke, the 2018-2019 campaign will be his first season as full-time head coach of the Ole Miss Rebels.

Luke, who took over as interim head coach after Hugh Freeze’s resignation last July, is also dealing with NCAA sanctions imposed on the Rebels. Ole Miss is hoping to win the appeal in their case, but the football team currently has a bowl ban for this upcoming year.

Despite all of the distractions surrounded around the program, Luke is optimistic about the players and coaches on his team.

Continuing the Momentum From Last Year

There is no denying the fact that Ole Miss got off to a lackluster start to the 2017-2018 season. The team began with a 3-5 record, with arguably the lowest point being a 66-3 loss against Alabama.

Even with all of the controversy around the team and how many losses the team suffered, the Rebels had a solid end to the year. Ole Miss finished by winning three of their last four games, with the last one against in-state rival Mississippi State.

Luke continued to talk about how his team’s finish led to a good recruiting class, highlighted by four-star Matt Corral’s commitment to the school in December. The former starting center for the Rebels also pointed out how the program’s momentum has carried through the spring and summer.

No Bowl Appearance, but the Rebels Still Have Big-Time Games

Unless Ole Miss wins their appeal against the Committee on Infractions’ decision, then the Rebels will not be playing in a bowl game this year.

Although the Rebels will most likely miss out on a bowl game for the third straight year, Luke said they still have games to look forward to on their schedule. The Rebels, who play in the SEC West, will face teams like Alabama, Auburn and LSU next season.

Luke also cited the importance of the Rebels’ final game against Mississippi State in what is known as the Egg Bowl.

What’s next for the Rebels?

Ole Miss opens up the season against the Texas Tech Red Raiders on Sept. 1 at NRG Stadium in Houston, Texas.

Previous Ed Orgeron, LSU Tigers Confident Heading Into 2018 Season
Next Kisner Leads The Open Championship After Day One at Five-Under, Woods Shoots Even