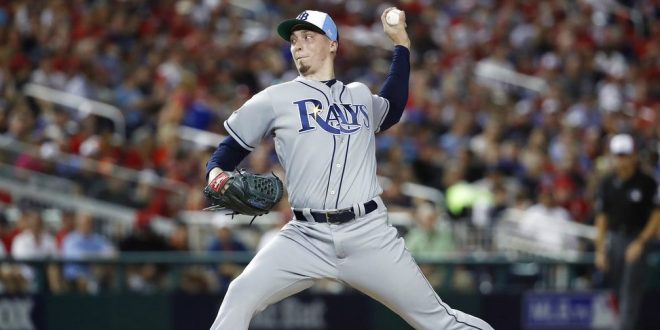 The MLB All-Star break is over. The Tampa Bay Rays and Miami Marlins are welcoming back in-state baseball with a three-game series from Tampa Bay.

This second half will be just as fun as the first. #RaysUp pic.twitter.com/Qgzvx2W7qs

Firstly, with the second half of the MLB season in full swing, the Marlins and Rays are looking to build momentum. The Miami Marlins are currently on a two-game win streak, recently defeating the Philadelphia Phillies two games to one. The most recent of those victories was a 10-5 win at home. Miami is currently fourth in the NL East, and hope that a series win against Tampa Bay will be the reversal of fortune they need.

Miami would also have an All-Star representing the team in this year’s mid-season classic. Catcher J.T. Realmuto would get the nod to represent South Beach in the big game from Washington. Realmuto is looking to continue his string of big-time performances this weekend against the Rays, being the Marlins’ biggest key in the matchup.

Congrats to our guy on a solid first #AllStarGame.

Miami is so proud of you, J.T. pic.twitter.com/D9oBAghTKV

Secondly, the Tampa Bay Rays are looking for their own slice of momentum ahead of the weekend showdown. The Rays are currently two games above .500, with a 49-47 record. Sending an All-Star of their own in pitcher Blake Snell, the pitching machine is looking to show everyone why many considered his absence from the original roster a huge snub.

The Rays’ record currently places them at third in the AL East, behind bitter rivals New York and Boston. Tampa Bay is coming off a series loss to the Minnesota Twins before the All-Star break, and took a big hit to their lineup before the game. Catcher Wilson Ramos suffered a hamstring injury that placed him on DL, causing him to miss the game on Tuesday.

Two teams from Florida that have All-Star representatives are battling for something bigger than an appearance in the game: The postseason. Can Tampa Bay shake off the defeat to Minnesota against the Marlins? Or will Miami continue their win streak and possibly get their first series sweep on the season?

The Rays and the Marlins will do battle at the Tropicana Dome in St. Petersburg, Florida. The series begins Friday night, and you can catch the action on ESPN 98.1 FM – 850 AM WRUF. Finally, coverage for the showdown will be available all weekend, with game one coverage beginning at 6:30 p.m.