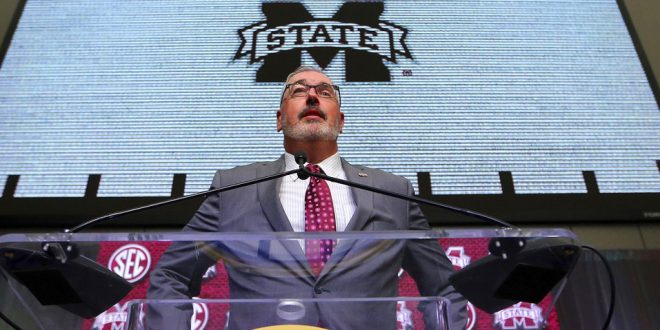 In Joe Moorhead’s first SEC Media Day as head coach of the Mississippi State Bulldogs, he showed the swagger needed to take over a program formally led by the outgoing Dan Mullen.

Moorhead’s confidence was on display Wednesday when talking about various topics regarding this upcoming season.

Moorhead has Confidence in his Quarterback

When asked to compare McSorely to Mississippi State’s Nick Fitzgerald, Moorhead saw a lot of similarities that can turn Fitzgerald into one of the top arms in the country.

With the group led by Fitzgerald, Moorehead will use the multitude of skills possessed by his quarterbacks to make the most out of his offense.

The Gameplan for Moorehead’s Offense

That will happen when you have the best running back in the nation in Saquon Barkley.

Now taking over for the Bulldogs, Moorehead won’t have a blue-chip back to lead the offense. Instead, he will have to rely on a balanced game to succeed when his team has the ball to fit the Bulldog’s personnel.

Moorhead also touched on how the team will handle the elevated expectations for next season.

With a large amount of returning starters on both sides of the ball, Mississippi State will look to play a relevant role in the SEC.

When asked about these expectations, Moorehead understands the added pressure but does not feel it will not play a huge role in the team’s mentality moving forward.

Moorhead believes the veteran leadership will make a huge impact on the team during the season, beginning with leaders Nick Fitzgerald and senior defensive end Gerri Green.

He will look to his captains to enforce a level of discipline and accountability for the team on and off the field.

The veteran-filled defensive line was also a point of discussion for Moorehead, as the front four were one of the top groups in the country last season. Led by Green, senior Montez Sweat and junior Jeffery Simmons, the D-line is expected to carry the defensive lineup.

With his experienced roster taking the field in Starkville, Moorehead expects the Bulldogs to be title contenders.

Overall, Morehead handled his first SEC Media Day with confidence and enthusiasm for the upcoming season.

If the Bulldogs can continue this bravado, they’ll be in good shape come football season.