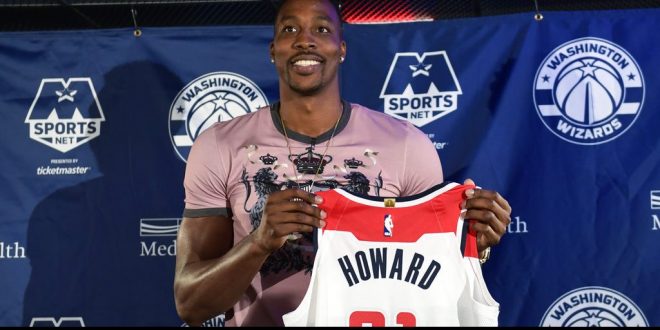 Dwight Howard has recently signed with the Washington Wizards on a 2 year contract and is feeling his new team.

Dwight Howard showed up yesterday to his first press conference as a Washington Wizards in good spirits.

Howard is a boarder-line hall of famer in many peoples opinion, but has had a hard time finding just one team to stay with for the past couple of years.  Howard recently departed ways with the Charlotte Hornets after averaging 16.6 points ppg  and 12.5 rebounds per game.

The big man has been on three different NBA teams in the past three seasons of his career. At his press conference, he said he wants to end his NBA career with the Wizards and says it feels like home.

Howard, in his early 30s, says he thinks he has about 8 more years left in the league, but in order to do that his game needs to change. The NBA has evolved so much in the years and playing with John Wall and Bradley Beal, his game has to evolve. Wall, who is a player that loves to score and pass the ball, is a different breed.

Joining the Wizards, his teammates are very excited with his addition and role on the team. Numerous teams that Howard has been on in the past never adapted to him, nor liked him. He would often bump heads with his teammates because they all said he joked around too often.

“I learned Magic for eight years. Traveled to La-La Land. Learned how to work with Rockets. I went and learned to fly with some Hawks. Got stung by the Hornets.”

Hopefully this upcoming NBA season for Dwight Howard, he can prosper and play a major role for this promising Wizards team.