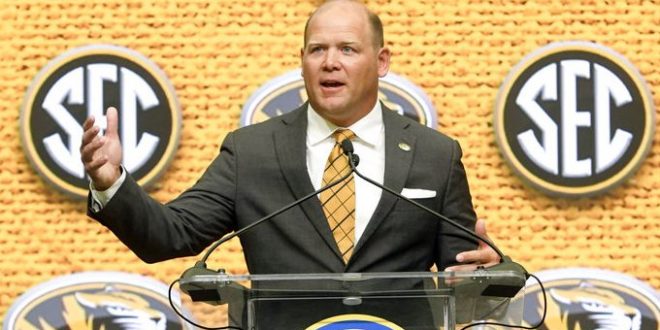 After winning their first game, the Tigers lost five straight matchups and were outscored 210-92 during that stretch.

Despite starting off 1-5, Missouri proceeded to win six games in a row, four of which were against SEC opponents. Although they lost to Texas in their bowl game, the Tigers are confident heading into the 2018-2019 season.

Odom took the podium at SEC Media Days last Wednesday to discuss the status of his players and staff members. Here are the highlights of what he had to say:

The biggest piece of news Odom received this year was when Drew Lock decided to forgo the 2018 NFL Draft. Lock is one of the top quarterback prospects in next year’s draft, and he has already earned sports on the Davey O’Brien Award and Maxwell Award watch lists.

Even though he is one of the best quarterbacks in college football, Lock is continuing to improve his overall game. Odom told reporters that Lock’s training since the beginning of the year has helped to improve his football IQ and make the game slower for him.

“With Drew, I think you look at some of the things skill set-wise that he’s able to do,” Odom said. “I think since January, working with the staff that he’s got, working on his footwork, working on the timing with the receivers, working on the understanding of reading the defense and maybe putting us in a better play call with what we’re getting on that side of the ball, the understanding of how all ten other moving parts work, along obviously with his position.”

Sticking with his offense, Odom also talked about the return of Damarea Crockett after last year’s injury. The junior running back only played in six games in his sophomore season due to a right shoulder injury.

Odom is impressed with how Crockett has bounced back from his rehab and improved as a player after his setback.

“The transformation he’s had within — from the time he came back going through winter conditioning, spring practice, and now his summer development, he’s as good as I’ve seen Damarea look,” Odom said. “He’s really healthy. He’s gained an extra step. To me, quickness and being able to put his foot on the ground and get north and south, the vision part of it is coming together with some power and explosiveness.”

In December, Odom hired Derek Dooley to replace Josh Heupel as offensive coordinator. Dooley’s extensive coaching history goes back to 1996, and he even served as head coach for Louisiana Tech and Tennessee.

With all the experience and knowledge Dooley brings to his program, Odom felt like he made the right decision to add him to the program.

“So Derek really hit every check mark for me on what I wanted in that position,” Odom said. “He also — because he was a
head coach in this league, it’s been good for me to be able to bounce some things off of him, just like the rest of my staff. And he’s sitting in the chair. He’s been in some of those opportunities to make decisions, learn from some things that he did right, learn from some things that he didn’t do right. And I’m appreciative of the approach he’s taken.”

Another shift in Missouri’s staff in the offseason came in December when Ryan Walters was promoted to defensive coordinator. Odom talked about coaching with Walters over the past four years and how they are working together to improve the Tigers’ defense.

“We were together at Memphis, so we’ve been together a long time and I was able to get him hired at Missouri when I made the move to be defensive coordinator,” Odom said of Walters. “So there’s a lot of similarities he and I have collectively on that side of the ball with the staff that they’ve got. It’s a group that’s working really well together. They’re building the defense together. I’m going to assist how I can and help out. Ryan’s going to call it on game day, and I’m excited about that moving forward.”

What’s next for Odom and the Tigers?

Missouri kicks off their season against UT Martin on Sept. 1, with their first game of SEC action coming against Georgia in Week 4. The Tigers will take on the Florida Gators at Ben Hill Griffin Stadium in their ninth game of the year.