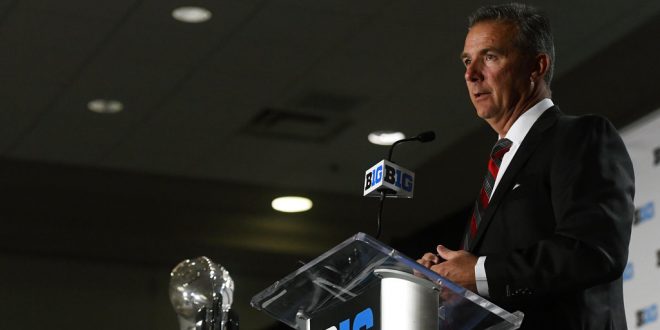 Urban Meyer has had easier weeks.

The 2018 media cycle got off to an inauspicious start for the Ohio State head coach. Never mind that Meyer had a Tuesday date at the Big Ten Conference’s Media Days; the 54-year-old took the podium just a day removed from the school’s firing of disgraced wide receivers coach Zach Smith.

According to cleveland.com‘s transcription of the press conference, six of the 13 questions Meyer faced pertained to the handling of the Smith situation. The others dealt with more traditional football topics, mainly the state of the quarterbacking depth chart.

Regardless of Meyer’s interviewing performance, one thing remains certain: This upcoming season could be interesting for the Buckeyes in more ways than one.

Smith’s firing was among the hottest topics at Meyer’s presser, and rightfully so: According to reports, the 34-year-old had allegedly abused his ex-wife as far back as 2009, when Smith was a graduate assist on Meyer’s coaching staff at the University of Florida.

Ohio State coach Urban Meyer knew about his assistant Zach Smith's domestic abuse allegations from 2009 but hired him in 2012.
Smith was fired yesterday after his ex-wife filed for a protection order. https://t.co/GreStcNFWz

In the ensuing days, Meyer’s reaction to the situation was panned on social media. Pundits and fans alike criticized the three-time national champion for not taking action years ago, and during his press conference, Meyer admitted to knowing of Smith’s abuse in 2009 and 2015.

However, the coach absolved himself of negligence. He claimed that he followed the proper protocol for dealing with similar situations and that, in both cases, no evidence of wrongdoing was revealed.

Meyer also noted that the decision to fire the 34-year-old wasn’t his — that it was a “group effort” — but that he understood the school’s decision.

“There’s a difference between a mistake and a core value,” Meyer said. “Mistakes are correctible. Core values are who you are. … Core values are very strong, so that was a big part of it.”

In a stark departure, Meyer was soon asked about his quarterbacking situation.

Despite having 39 days until the Buckeyes’ season opener against Oregon State, Meyer said that sophomore signal caller Dwayne Haskins “would be the quarterback.”

“The big word is respect,” Meyer said. “You have to understand the entire defense, have to understand all other ten players, what they’re doing on offense. He has to make decisions in split seconds; and, by the way, he’s got people like (Nick) Bosa trying to tear his throat out. … 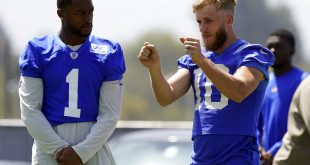 Week One of the 2022 NFL Season kicks off Thursday in Los Angeles. After a …