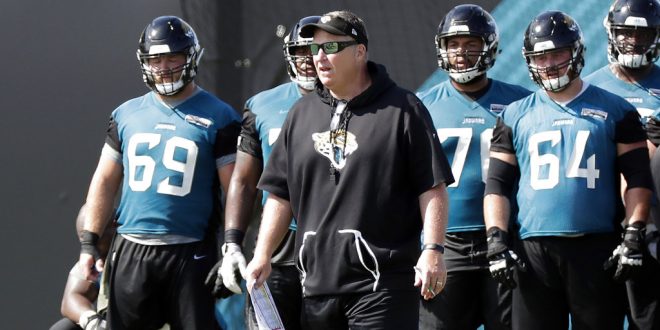 Coming off a successful 2017 campaign that saw the Jaguars finish with a 10-6 record and advance to the AFC championship, the confidence level is high within the Jaguars’ camp.

The Jaguars’ head coach is taking last years lose in the AFC title game as learning experience. He said that a lose is disappointing, but the team can use it to continue to build success.

Marrone holds an 11-7 record as the Jaguars head coach and brought the team to the postseason for the first time since 2007.

A winning record tends to boost the confidence of a team, and that holds true for the 2018 Jaguars.  Following Malik Jackson‘s comments saying he believes the Jaguars will go 16-0, linebacker Telvin Smith backed him up.

The Jaguars are coming off a season where they boasted the second best defense in the league. They held opponents to under 17 points-per-game and recorded 21 interceptions.

Most of the 2017 nucleus is back for Jacksonville f0r 2018. Blake Bortles will be entering his fourth season as the Jaguars’ quarterback, and is coming off his best season as the starter. Bortles finished 2017 with 3,687 passing yards and 21 touchdowns. He also completed over 60 percent of his passes.

Leonard Fournette will be in the backfield for his second season after a breakout rookie campaign. Fournette rushed for 1,040 yards in 13 games, and broke through the goal line nine times. Fournette had an ankle injury that kept him out of three games last season and will look to start all 16 games in the backfield this season.

On the defensive side of the ball, the Jaguars should be just as strong as last season. The linebacking due of Telvin Smith and Myles Jack will anchor the defense for a second consecutive season. The duo racked up 133 tackles last season.

In the secondary, A.J. Bouye and Jalen Ramsey are back and will continue to reek havoc. The pair recorded 10 interceptions last season and lead the best secondary in the NFL.