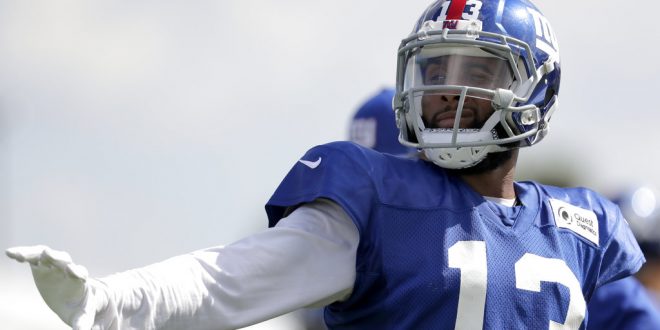 Saquon Barkley might be the new kid in town, but New York Giants fans may be more excited about the return of one of their old favorites.

If Odell Beckham Jr.’s contract negotiations continue to sputter, it could be a short comeback.

While they’ve failed to reach an agreement, both sides apparently have similar intentions: The NFL Network’s Ian Rapoport reported that the parties “engaged in good-faith negotiations” to make him the best-paid wideout in the NFL.

The Giants would be wise to oblige: There aren’t many that have done what Beckham has.

As is, the Pittsburgh Steelers’ Antonio Brown is the league’s highest-paid wide receiver, earning an average of $17 million a season.

Through the first three years of his career, Beckham averaged totaled 4,122 receiving yards, snagging 35 touchdown receptions in the process. Through his torrid 2013-2015 run, Brown picked up 909 more yards through the air; however, Beckham managed to find paydirt four more times.

Odell Beckham Jr is the only player in NFL history to record at least 90 receptions & 1,300 receiving yards in each of his 1st three seasons.

Despite playing just 4G in '17 after being placed on IR w/a an ankle injury, his 38 career TD catches are still 2nd in the NFL since '14.

To Beckham’s credit, his contract negotiations aren’t affecting his preparations for the upcoming season: A June article from Bleacher Report reported that Beckham wouldn’t hold out, and the 25-year-old kept that promise when he reported to camp.

More money or not, Beckham — and his healed ankle — are central to the Giants’ hopes to reverse their fortunes from last season’s 3-13 showing.

“After I see my ankle snap and it feels like your world turns upside down, life’s just different. Honestly, for real, I’m just happy to be back out there running around,” Beckham said.

“They’ll get it done when they get it done. Let my agent and them figure it out. I just come out here, try and get all the plays down (and) focus on being the best that I can be.”