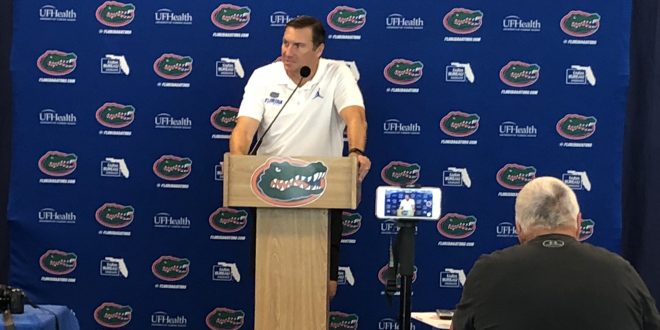 Mullen is Gaining Confidence in the Gators Following Sunday’s Scrimmage

Gators head coach Dan Mullen addressed the media Monday afternoon following the team’s scrimmage on Sunday. Mullen saw some improvements from several positions in the scrimmage, but wants to see more from his team as the start to the season inches closer.

The biggest story of training camp continues to be the three-way battle for the starting quarterback spot.

Just 12 days away from the opener, who will be starting under center for the Gators against Charleston Southern remains a mystery. However, Mullen said he expects whoever starts Sept. 1 will start the entire season.

Before the start of the season, Mullen said the quarterbacks need to take the next step in their understanding of the offense.

After Sunday’s scrimmage, Mullen said the team is trending in the right direction, but not where he wants them to be.

Sophomore running back Malik Davis sat out the scrimmage as he continues to heal from the ankle injury. Mullen expected Davis to be cleared to practice Monday.

While most of the attention is on the quarterback battle, the offensive line competition is the one most open on the offensive side. Mullen wants to rotate his linemen without having a drop off in performance.

After the scrimmage, Mullen said the unit needs to continue to progress.

He said there is no clear starter at the center position at this time.

With the first game rapidly approaching, it might be easy for the players to start looking ahead to the start of the season. The team has just a few days of training camp left before they start game prep for Charleston Southern.

Mullen said the next few days will be important from a mental standpoint for his team.

Kodak To The Swamp?

During his press conference Monday, Mullen addressed a recruiting tweet he sent out early Monday afternoon. The Gators head coach tweeted at rapper Kodak Black, who is a famous Gator fan, to return to The Swamp.

@KodakBlack1k Need to get you back to The Swamp. #Gators

Mullen explained his efforts to recruit the rapper.

Previous No. 7 Gators Strike Early to Beat In-State Foe FAU 4-2
Next Baltimore Ravens vs. Indianapolis Colts: A Tale of Two Quarterbacks With A Lot To Prove