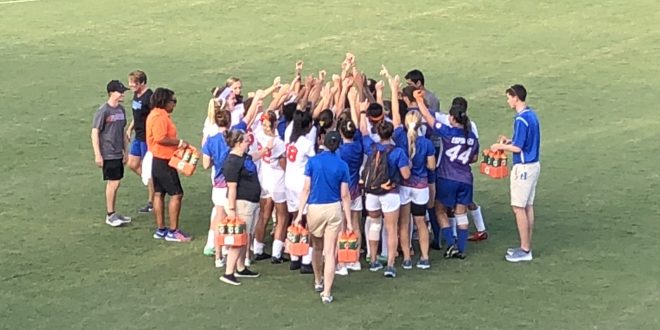 The No. 7 Florida Gators wrapped up the opening weekend to the 2018 season with a 4-2 victory over in-state foe Florida Atlantic Sunday evening.

Gators head coach Becky Burleigh stressed to her team to strike early against FAU to put the pressure on. This message had more meaning to it following the season opener against Washington Friday. The Gators trailed at the half had to play catchup for most of the contest before prevailing 2-1.

The Gators got on the Owls early with a goal in the 15th minute from senior forward Melanie Monteagudo with the assist coming from freshman forward Cassidy Lindley. This was the first goal of the season for Monteagudo as well as her 10th of her career. She became the 39th player in program history with 10 or more career goals.

Florida would get on the board again in the 35th minute when sophomore forward Madison Alexander found the back of the net from just eight yards out for her second goal of the season.

Senior midfielder Sarah Troccoli, who had the assist on Alexander’s goal, said the team’s early tempo in both halves set the tone.

The story out of Sunday’s victory was the play of forward Cassidy Lindley. In just her second game as a Gator, Lindley got the first goal of her college career. The goal came just 56 seconds into the second half. She got the feed from senior midfielder Sarah Troccoli and scored on an eight-yard shot. This goal gave Florida a commanding 3-0 lead over the Owls.

The first year Gator’s contributions weren’t done just yet. After the Owls got on the board in the 51st minute on a goal from junior forward Tirill Haga, the Gators would respond in the 63rd minute with a header from five yards out from junior midfielder Sammie Betters. Lindley picked up an assist after setting up Betters with the cross.

Monteagudo, who scored her first goal off of one of Lindley’s assists, said freshmen contributions always makes the team better.

The Gators survived the opening weekend of the 2018 season by claiming two home wins in two different fashions.

Even though the Gators start the season undefeated, Burleigh said there are things the team needs to work on, which includes defending set pieces. Set pieces were the cause of the two FAU goals and prevented the Gators from putting together a shutout.

Junior goalkeeper Susi Espinoza, who finished the game with a career-high seven saves, likes what she has seen from her team and is confident the team will have a successful 2018 season.

After playing two games in three days, the Gators will get some must needed rest before they return to the pitch Friday night when they host No. 23 Ohio State at 7 p.m.