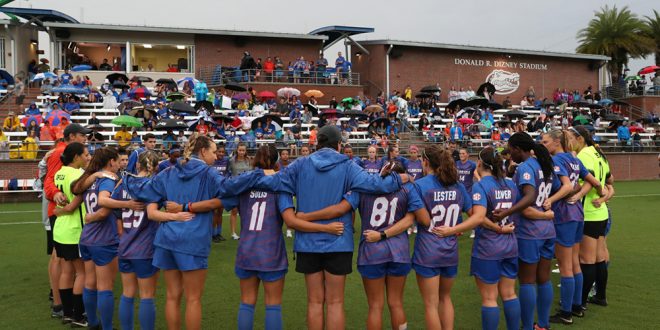 During the Gators' 2-1 win against the Washington Huskies on Friday, August 17, 2018 at Donald R. Dizney Stadium in Gainesville, FL / UAA Communications photo by Tim Casey

No. 5 Gator Soccer Takes On Ohio State and Oklahoma State this Weekend

Following their wins over Washington and Florida Atlantic last weekend, the No. 5 Florida Gators soccer team is back in action this weekend. They continue their long stretch of matches against non-conference opponents. The Gators will host Ohio State tonight and then travel to Oklahoma on Sunday to take on Oklahoma State.

The Buckeyes have had a rough start to their season, going 0-2 so far. However, Florida Head Coach Becky Burleigh has not underestimated them, noting that they did not face light opposition. Ohio State’s two losses came as they traveled to North Carolina to take on two ranked opponents: No. 11 Duke and No. 4 North Carolina.

The Buckeyes will come to the Diz tonight to take on the Gators who are starting to build confidence after a great opening weekend. The Gators won their opener 2-1 against Washington last Friday and took down in-state rival Florida Atlantic 4-2 on Sunday. Burleigh noted that the team is now facing a more difficult challenge in Ohio State and their defensive style of play.

While Ohio State has not yet won a game, Burleigh acknowledged that they still have crucial experience this season having played two really big games in their opening weekend. The Gators have not yet faced ranked opposition like the Buckeyes have so early on in the season.

Oklahoma State will pose a new challenge for the Gators this season. This will be the team’s first away game and they’re not traveling to the friendliest of places. Oklahoma State just opened a new stadium and had 4,122 fans in attendance for their first home match this season. Burleigh, however, said the team has accepted the challenge and believes that the large attendance could be exciting.

Oklahoma State has only faced in-state rival Oklahoma who they beat 2-1 last weekend. The Gators will look to win their first game on the road when they travel to Oklahoma. In Oklahoma State, they face a highly athletic and, unlike Ohio State, a more direct team. For a team like Florida who likes to play possession-style soccer and build-up an attack, facing a direct team will be a challenge both offensively and defensively.

Looking Ahead for the Gators

Before the season started, Burleigh said she was somewhat anxious to see how the mixture of strong personalities would play out. The team this year has 11 seniors, and there were questions over how the personalities on the team would mesh. But Burleigh said that “the team has done a great job at not deferring in the leadership model at all” where the players all step up to their part “without butting heads.”

The 11 seniors are also joined by a good core of younger players. Most notably, Cassidy Lindley who was named the first SEC Freshman Player of the Week of the season. The combination of players on this team along with the mentality Burleigh has instilled in them has them prepared for a tough schedule this season. There will be many challenges beginning with Ohio State and Oklahoma State this weekend.

The Gators soccer team will take on Ohio State on Friday, August 24 at 7:00 pm at the Dizney Stadium. They will face Oklahoma State on Sunday, August 26 at 1:30 pm.