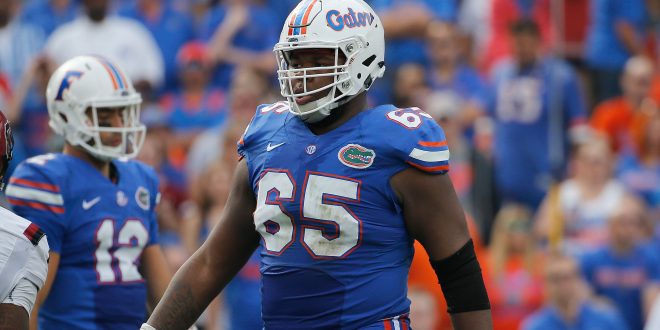 Jawaan Taylor Is Eager To Get His Junior Campaign Underway

It’s been a long time since the Florida Gators football team stepped foot on Florida Field against Florida State.

In fact, believe it or not, that was nine months ago.

Back in November, UF was embarrassed at home by its in-state rival that concluded a miserable 4-7 season.

With a new coaching staff and a new culture in place however, this year’s team hopes to rid themselves of last season’s demons.

Jawaan Taylor is optimistic about this year’s football team:

Many believe the offensive line underperformed heavily last season, leaving a lot of room for improvement this offseason.

Under new offensive line coach John Hevesy, the line has a new sense of identity and a swagger it hasn’t had in a while.

Taylor talked with the media yesterday and he brought up what people should expect from this year’s Florida team.

Taylor has been a pleasant surprise since he stepped on campus.

The former three-star recruit had a surprising breakout freshman season and has been a staple on the UF line ever since.

The tandem of Taylor and senior Martez Ivey figure to flex their muscle this season to help lead a rushing attack that will compete to be one of the best in the SEC.

It seems starting quarterback Feleipe Franks has been working on his leadership skills over the offseason.

Many of the players have brought up how they’ve noticed Franks has really upped his energy level when it comes to being a good teammate.

Jawaan Taylor was no exception when he was asked about it yesterday.

The high praise from his teammates recently had to be a factor in him being named starter by Dan Mullen this week.

Franks will get a chance at starting his redshirt-sophomore campaign off on the right foot on Saturday night when the Florida Gators take on the Charleston Southern Buccaneers at Ben Hill Griffin Stadium.