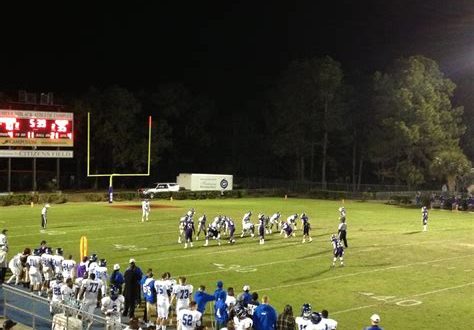 There are a lot of good high school football match ups this week. Some of the coaches in the area talked with Steve Russell on ESPN 98.1FM Sport Scene to preview their games.

The Oak Hall Eagles (2-1) host the St. Joseph Flashes (3-0) at 7pm tonight. This game has been an important one in pervious years. However, last year they were unable to have the game due to weather, but in 2015 and 2016 the winner of this game went undefeated and won the North Florida Football Conference Championship.

Oak hall’s head coach, Matt Dibernardo says that while his team might not be the most experienced, they’re still a good unit.

The freshman QB he’s talk about is Cole Gonzales, which is the Florida Gators Offensive Coordinator’s, Billy Gonzales’s son. Cole Gonzales’s football IQ is one of the reasons Coach Dibernardo says he’s been able to be so successful.

Coach Dibernardo expressed that contrast to his team, St Joseph is a more experienced team. He also said that the Flashes have a few offensive players that will be difficult for his defense to manage.

Says the defense is looking good they haven’t been scored on yet in their first two game. One reason being that the team practices tackling every day.

The Eastside Rams will take on the Newberry Panthers tonight at 7:30. Rams head football coach, Cedderick Daniels, says that Newberry is a very physical team to face.

Daniels said that his defense has really been struggling this year , but that they are improving in their tackling game. He also mention that he’s hard on his offense, because missed blocks have made differences in their games.

There’s been a few key offensive players that Coach Daniels says he’s been able to lean on this season.

P.K. Yonge is hosting Bronson at 7:30pm. P.K. Yonge head coach, Marcus McDonald, say that his team has had the right mindset this week in practice to bounce back after a loss to Hawthorne.

Coach McDonald believes that Bronson will be a little easier to manage than Hawthorne last week.