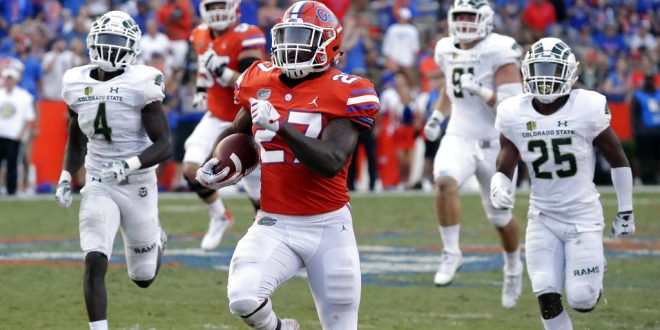 Florida running back Dameon Pierce gets past the Colorado State defense for a 68-yard touchdown run during the second half of an NCAA college football game, Saturday, Sept. 15, 2018, in Gainesville, Fla. (AP Photo/John Raoux)

The Florida Gators move to 2-1 on the season after beating Colorado State 48-10 in their third home appearance.

Saturday’s game got off to a slow start for both teams. Florida quarterback Feleipe Franks began with six incomplete passes. The Gators had possession of the ball for just 4:44. Florida would settle for two field goals from Evan McPherson, including a career-long 48-yarder.

Colorado State fumbled twice and could only convert one out of four third-downs. The Rams failed to enter the red zone, despite having possession of the ball for 10:16.

Florida had five sacks and forced three turnovers. The Gators were able to keep the Rams off the board until the final two seconds of the first half. CSU kicked a 53-yard field goal to make it a 27-3 game

Florida’s special teams effort was on full display. Special teams had a forced fumble, a blocked punt and a punt return. The blocked CSU punt return from freshman Amari Burney ended in a touchdown for the Gators, with the recovery from Tyrie Cleveland in the end zone.

Florida head coach Dan Mullen said his team will enjoy the win, but noted there will be improvements made in practice this week.

The Gators are on the road for the first time this season as they take on Tennessee in an SEC matchup next Saturday at 7 p.m.

Born and raised at the ballpark! Typically quiet- until it comes to sports. I'm a South Florida native with a passion for baseball nearly as strong as my faith. Grew up in garnet + gold, turned out sporting orange + blue. Likely to be found with a camera. And yes, I take food pictures.
@victoriarossman
Previous Gators Sweep the Day, Down JU and FIU
Next Special Teams, Defense Key to Gators Rout