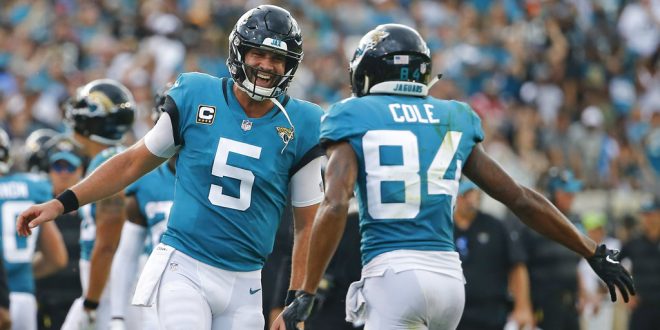 The temperature at kickoff was 97 degrees, the hottest home game in Jacksonville history. But mother nature wasn’t the only one that brought the heat.

New England (1-1) had just picked off Bortles to get the ball back deep in Jacksonville (2-0) territory shortly after making it 24-10 via a Chris Hogan touchdown reception.

Instead of coming within seven though, Fowler’s strip sack put any chance of a Patriots’ comeback on ice.

TAKE IT TO THE HOUSE @DedeTHEGreat11 #DUUUVAL pic.twitter.com/b314NMjJZi

No Fournette, No Problem for Offense

Star running back Leonard Fournette was ruled out shortly before the game with a hamstring injury suffered in Week 1 against the Giants.

But instead of struggling like they did in the AFC Championship game last year in New England, the Jaguars offense carved through New England all game long at will.

That in large part was due to an aggressive and well executed game plan by offensive coordinator Nathaniel Hackett.
He put the ball in Bortles hands early, and with good protection from the offensive line, the passing game hummed along like a well-oiled machine to the tune of Bortles’ four touchdowns and 377 yards through the air.

Bortles got off to a hot start early, driving the team down the field on its opening drive before connecting with Donte Moncrief on a fade route for a 4-yard touchdown.

On the ensuing drive after a Patriots’ punt, it was the Keelan Cole show.

The young wide receiver made a contender for the catch of the year, lifting his right hand for an Odell Beckham Jr.-esque one-handed grab for a first down. Bortles then found him the corner of the end zone for a 24-yard touchdown to cap the 7-play, 84-yard drive.

New England showed signs of life with a Stephen Gostkowski field goal in the second quarter that made it 14-3.

Those signs went away quickly though, as Bortles drove Jacksonville right down the field to make 21-3 right before halftime with a 7-yard touchdown pass to Austin Seferian-Jenkins.

For as good as the offense was, the Jags defense never allowed Brady (24-35, 234 yards, 2 TD’s) and company to get in rhythm. Rob Gronkowski was held in check for only two catches, and Brady had trouble finding anyone not named James White (seven catches), apart from Chris Hogan’s two touchdown receptions.

Jacksonville sacked Brady twice, stood sturdy in the run game by allowing only 82 yards on 24 carries, and limited New England to just 4-for-12 on third down.

The win avenges Jacksonville’s 24-20 loss to New England in last year’s AFC title game. The Jaguars felt they could’ve beaten the Patriots on that night in Foxborough, and they showed why Sunday in Jacksonville.

In a battle between two teams many expect to be back in the playoff picture, the Jaguars secured early bragging rights amongst AFC heavyweights.