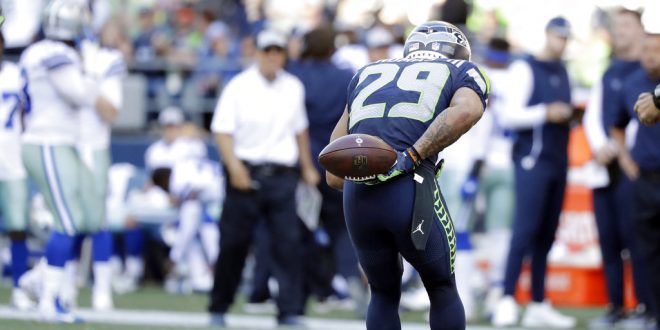 Seattle Seahawks free safety Earl Thomas bows in the direction of the Dallas Cowboys bench after he intercepted a pass during the second half of an NFL football game, Sunday, Sept. 23, 2018, in Seattle. It was Thomas' second interception of the game. (AP Photo/Elaine Thompson)

A Look Back at Earl Thomas’ Bizarre Week

That might have been the most normal part of his week.

Thomas’ performance Sunday came on the heels of a week in which he missed two days of practice, on Wednesday and Friday.

Thomas is in the last year of his contract and wanted an extension in the offseason. Seattle and Thomas didn’t reach a deal, and Thomas thus held out until the Wednesday before the opening game at Denver.

Despite technically ending his holdout, the former Texas Longhorn safety is now “holding-in,” in hopes of forcing a trade. He sat out Friday’s practice and showed up late to Saturday’s walkthrough, according to Fox’s Jay Glazer. Per Glazer’s report, the Seahawks were considering heavy fines for their star safety for conduct-detrimental to the team.

“I need to make sure my body is 100,” Thomas said after the win over Dallas. “I’m invested in myself. If they was invested in me, I would be out there practicing. But if I feel like anything, I don’t give a damn if it’s small, I’ve got a headache, I’m not practicing. But I don’t want that to be taken the wrong way. I know I’m going to get fined. But that’s just where I’m at with that.”

All of the reports, including trade rumors, loomed as background for Thomas’ performance against his childhood team on Sunday. A Texas native, Thomas grew up cheering for the Cowboys and told Dallas to “come get me” whenever Seattle got rid after the two teams played each other in late 2017.

Thomas had a pick in each half off Dak Prescott. After his second one, in the fourth quarter, he bowed in front of the Cowboys’ sideline. According to Thomas, “People was coming up to me and saying a trade might happen. Even pregame, a couple of Cowboys coaches — I don’t know if they were trying to play psychological games — but they was like, ‘You ready for the trade tomorrow?’.”

Earl Thomas bowing to the Cowboys, after his 2nd INT. pic.twitter.com/BY1Am2X8WQ

Monday, trade rumors continued to swirl about Thomas, with the Cowboys and Chiefs among the teams rumored to be aiming for him, according to ESPN’s Chris Mortensen.

The Seahawks are considering a significant fine to Earl Thomas for conduct detrimental for twice missing practice. No final decision made. He's expected to play vs. Cowboys AND the Chiefs have emerged as a possible trade partner if Thomas is dealt this year, per sources.