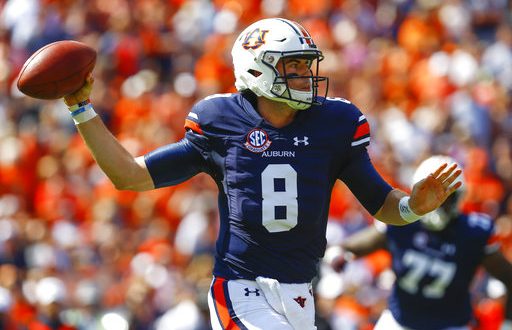 The Auburn Tigers are coming off a 34-3 drubbing of the Arkansas Razorbacks in its SEC opener. Its opponent this week, Southern Miss, took care of business at home against Rice.

Just How Good is Auburn?

The Tigers have been a hard team to gauge thus far into the season. Yes, they beat a top-ten team in Washington and played to the last minute against a very capable squad in LSU. But the AU offense is clearly problematic.

Tigers Head Coach Gus Malzahn even said it himself.

Last week when Auburn took down Arkansas, the final score was rather…misleading. The Razorbacks outgained the Tigers in total yards 290-225. They also matched them in first downs with 13 and had a significantly higher time of possession.

Tigers QB Jarrett Stidham went an efficient 15 for 22, but only notched 134 yards and a total QBR of 30.1. Against the Razorbacks’ porous rush defense, Auburn’s best running back in JaTarvious “Boobie” Whitlow only managed 49 yards on 13 carries.

Southern Miss isn’t an elite opponent. But a good showing for AU would do wonders going into the following game against Mississippi State.

Southern Miss QB Jack Abraham is legit. The only game in which he threw for less than 375 yards was in the first of the season against Jackson State. Abraham threw for four touchdowns and 242 yards. The stat line was so low because he was pulled at halftime to let the second-string QB log some snaps.

He smoked the Rice defense to the tune of 428 yards, four touchdowns and a total QBR of 81.8 last weekend as well.

Now, obviously, none of the teams Southern Miss has played so far have been at the same caliber as the Auburn defense. But Abraham merits an extra film session or two. Expect the Golden Eagles to deploy the pass at least 30-40 times against the Tigers.

In a weird turn of events for Auburn offensive coordinator Chip Lindsey, he will once again see Southern Miss. But this time, it will be opposite the Golden Eagles.

Lindsey coached at Auburn as an offensive analyst in 2013 when the Tigers lost in the BCS National Championship against FSU. Following that stint, he took a job with Southern Miss as the offensive coordinator before returning to the Tigers in the same position in 2017.

Auburn head coach Gus Malzahn spoke on Lindsey this week, and called him his “right-hand man.”

The Tigers and Golden Eagles face off Saturday at 4 p.m.

Chris O'Brien is a rising sophomore at the University of Florida. He aspires to be an on-air sports anchor someday.
Previous Undefeated Alabama Crimson Tide takes on Sun Belt Foe LA Lafayette
Next Are the Pats Done?