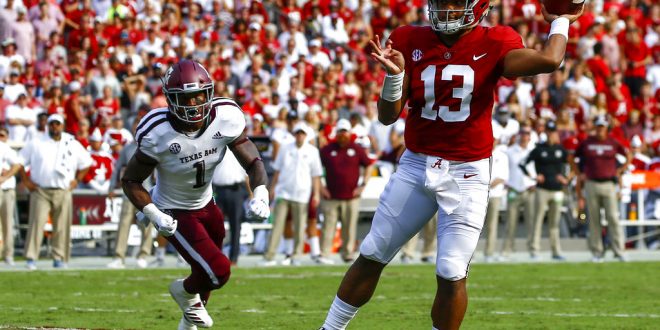 Alabama quarterback Tua Tagovailoa (13) throws a touchdown pass against Texas A&M during the first half of an NCAA college football game, Saturday, Sept. 22, 2018, in Tuscaloosa, Ala. (AP Photo/Butch Dill)

The Crimson Tide won all eight prior meetings leading up to Saturday, with the last meeting in 1990 ending 25-16.

Alabama remains at the top of this week’s AP poll after receiving 60 of 61 first-place votes, and it’s easy to see why. Who’s the one voter? Soren Petro, a host for Sportsradio 810 in Missouri, picked Clemson and Georgia ahead of Alabama since the beginning of the season.

Saban explained that there’s a standard he wants Alabama to maintain going into every game.

Saban, who has a lot of talent, must now deal with the new NCAA transfer policy.

Ragin’ Cajuns Have Room for Improvement

Despite the Ragin’ Cajuns being tied third nationally in fewest turnovers with two through three games, the team has a lot to work on. Louisiana Lafayette is last in the Sun Belt in rush defense, allowing 263 yards per game. Additionally, Napier’s team only has possession of the ball for 25:39 per game.

Nonetheless, improving on defense will open up running back Trey Ragas and quarterback Andre Nunez to have more time on offense. The Ragin’ Cajuns have scored on all 10 red zone possessions this season and have the highest third-down percentage in the Sun Belt (46.9).