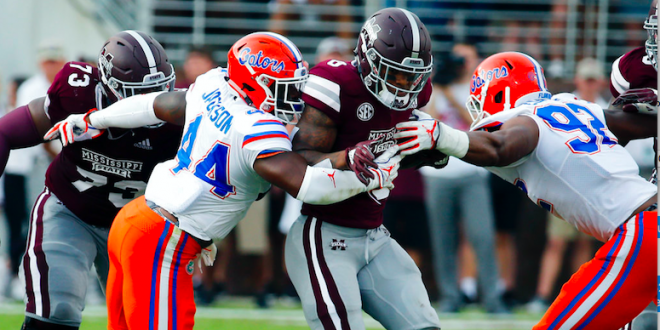 Last Saturday the Gators Defense showed up big time in a statement win against Mississippi State.

Todd Grantham’s defense were able to hold the 23rd ranked Bulldogs to only 206 total yards on the night and only allowing six points. Nick Fitzgerald quarterback for Mississippi State, was looking good until he faced the Gators. Saturday he threw for a total of 98 yards and was sacked six times.

“It was all preparation, that how we were able to frustrate him,” said Gators Defensive Tackle Tedarrell Slaton. “We felt like he was going to run, because we were taking away passing yards away from him, but once he wasn’t running as much we decided to push the pocket”

All that pressure on Fitzgerald led up to the Gators big play where they sacked him on 4th and ten with a little over a minute left to play in order put the game in the bag.

“It was one of our all out blitz plays that was going to work either way, but they had a man wide open down field so if he would’ve thrown the ball instead of panicking he would still be playing right now,” said Slaton.

After coming off that big win against a ranked Mississippi State team,  Slaton and the Florida Gators Defense are ready to take on No.5 ranked LSU.

Going into Saturdays matchup, LSU quarterback Joe Burrow has been on fire throwing for over a thousand yards with six touchdowns and zero interceptions. Not to mention their running game and offensive line has also been red hot accounting for 13 touchdowns in  just five games.

“I feel like they are the best O-line we are going to face this season,” said Slaton. “It just brings a challenge to me and our D-line, it just a challenge to hit the weight room and be physical with our O-line to be up and ready for them.” ” We also have to find a way to get to the quarterback, we have to make him a true quarterback and not let him run, we need to make him throw bad balls and commit mistakes,  we need to get good legal hits and get some sacks”

With LSU ranked at no.5 this makes this matchup the biggest game played at home since 2015 when Ole Miss came. For the Gator defense they see it as an opportunity to play even harder to avoid losing at home.

Previous Stiner and Stewart: Making Their Mark
Next NL Wild Card Preview: Rockies And Cubs To Clash At Wrigley Field