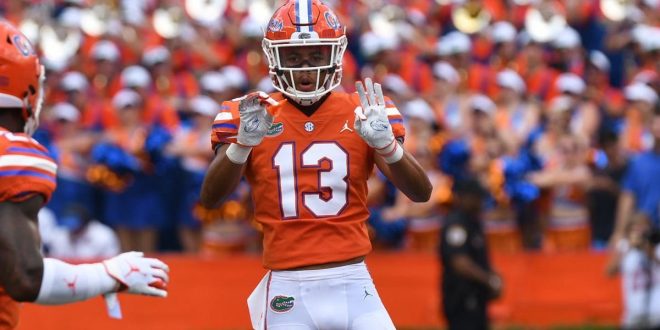 Stiner and Stewart: Making Their Mark

Safety, Donovan Stiner, and defensive back, Brad Stewart Jr. are showing the Gators that they mean business.

This time last year, as a freshman, Stiner was on the sidelines watching and waiting for his moment. On Saturday, during the last play of the game, his moment came.

Stiner had a storming blitz from the back of the Gator defense to the Bulldogs back field. He nailed quarterback Nick Fitzgerald for a 10-yard loss giving the Gators a 13-6 upset win over No.23 Mississippi State. After his firing play, Stiner was awarded a starting safety position.

BALLGAME!!! DONOVAN STINER BLOWS UP NICK FITZGERALD AND THE #GATORS HAVE COME ON THE ROAD TO STARKVILLE AND PULLED OFF THE UPSET!!! pic.twitter.com/5TeR7VZlRw

His explosion of a tackle had other teammates nickname him the “Waterboy” from Adam Sandler’s 1998 movie.

Stiner said the starting position is what he has always worked for and after the biggest play of his young career at UF, he’s not done yet.

Stewart was born in New Orleans, Louisiana, and actually grew up as an LSU fan.

However, Stewart became a Gator fan during the Time Tebow era. He said he knew he wanted to go to Florida when the Gators and the Tigers met in Baton Rouge in 2016 and he watched the Gators get a  fourth down stop, drive on the last drive, get to the goal line and score, making them victorious.

He’s ready to head back to Louisiana and prove that the Gators are there to play. Stewart says he has been getting calls from friends about the game, but he won’t pay too much attention to the trash talk before this week’s game.

In 2017, Stewart played in eight games and had 13 tackles all season. So far in 2018, after five games, Stewart has 20. Along with an interception.

Stewart says in the middle of the football chaos, he is able to track the ball and do what he needs to do.