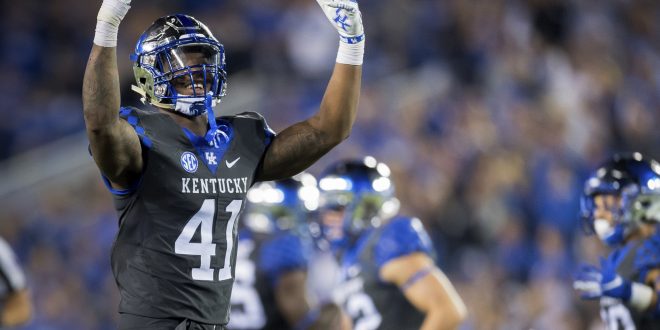 This is a matchup 65 years in the making.

The undefeated No. 13 Kentucky Wildcats make their way into College Station for a showdown with the Texas A&M Aggies.

"They're dominating teams."@UKFootball is a legit SEC East contender. https://t.co/SyNOtl7Z5i

Going into the Way-Back Machine

Both squads have only met twice in their entire histories before this weekend. The years they did? Back-to-back bouts in 1952 and 1953.

The coach for Texas A&M was Raymond George while Kentucky’s head man was the one and only Paul “Bear” Bryant. The head coaches who will be on the sideline for both teams were not even alive during this time.

That 1952 faceoff was Kentucky’s last Kyle Field appearance. They escaped College Station with a 10-7 win. A&M got them back one year with a 7-6 win in Lexington.

Here are some anecdotes about the last time they faced off:

Mark Stoops said his team is taking it one week at a time. He said it’s about continuing to move forward and improve.

Stoops on keeping the focus:

Kentucky will be in a hostile environment for just the second time this season. They’ll be in front of 100,000 strong in College Station. Stoops said it’s all about staying composed.

Stoops ran the defense and defensive backs under Jimbo Fisher 2010-2012. He said Fisher taught him how to build “an SEC team.” He still implements those lessons to this day.

It’s been six years since Stoops had to coach against Fisher in practice. But, he said he sees similarities in terms of how Fisher’s team possesses the ball and sets up teams to go after them later.

“He’s just not one of those guys who just calls plays,” he said. “He has a rhyme and a reason for everything he does, and you better hold on because he’s going to attack you.”

Fisher had plenty of praise for Stoops’s team on the SEC coaches’ on offense and defense.

Fisher said the Wildcats rusher the passer and play the run well. He credited Stoops for the team he has put together.

He sees similarities in the characteristics of Stoops’s defense, but they are different in terms of the schemes being run. Fisher said Stoops ran more of a 4-2-5 defense at Florida State as opposed to a 3-4 while at Kentucky.

“Even though they may only bring four guys on a play,” Fisher said. “You have to account for seven and eight constantly.”

When hiring him at Florida State, Fisher said he hired him on the spot. He hired Stoops based on what he saw coaching against him and his incredible football background.

Come Saturday night, people will find out whether the student has become the master.