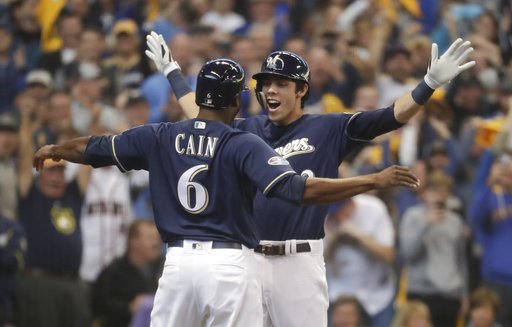 The Milwaukee Brewers and the Colorado Rockies are facing off in the National League Division Series. In the NLDS game one, the Brewers gave up a 2-0 lead in the 9th when the Rockies tied the game 2-2. However, the Brewers still beat the Rockies 3-2 after 10 innings. The pair play again Friday night in game two of their five game series.

The Brewers scored in the 3rd when Lorenzo Cain walked and Christian Yelich homered to center field.

The Rockies tried to make a game out of it in the 9th inning scoring their only two runs of the game. Gerardo Parra singled to right field. Matt Holliday hit one out to center to move Parra to second. After, Garrett Hampson came in to run for Holliday. Charlie Blackmon singled to right to score Parra and move Hampson to second. Then Arenado hit a sacrifice fly to center that brought in Hampson to tie the game at 2-2.

The Brewers scored again in the 10th inning after Christian Yelich walked and Mike Moustakas hit a walk off to right field to bring in Yelich to win the game 3-2.

Rockies manager Bud Black said that he was proud of his teams fight in game one.

Starting on the mound in game two, for the Rockies is LHP Tyler Anderson. One of the Rockies that’s really been performing well is Third basemen Nolan Arenado, who leads Colorado in home runs (38), RBI’s (110), and batting average (.297).

RHP Jhoulys Chacin will be starting on the mound for the Brewers. Right fielder Christian Yelich has been playing incredible well. He leads the team in in home runs (36), RBI’s (110), and batting average (.326).

While the Rockies won the game one, the Brewers do hold the 2018 overall record 6-2.

The NLDS game two will be played in Milwaukee at 4:15pm on FS1.

Follow me on Twitter @SarahCarlieUF or Instagram @sarahcarlie
@SarahCarlieUF
Previous High School Football Preview: Gainesville vs. Buchholz City Rivalry
Next Everything you need to know ahead of Yankees-Red Sox ALDS Matchup