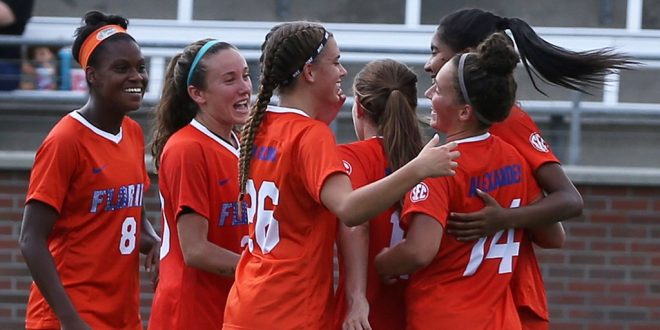 Gator Soccer Falls Below .500 in SEC Play with Loss to Gamecocks

The Florida soccer team is finding itself back in a familiar, but uncomfortable place. The Gators traveled to Columbia to take on the No. 12 South Carolina Gamecocks, but took a 1-0 loss on Sunday. This is Florida’s ninth game this season where a ball never found the net.

In the 11th minute, USC’s Selma Sol Magnusdottir scored from 12 yards out for what would be the only goal of the game. The Gamecocks shot 14 times, compared to Florida’s 12. In the second half, the Gators lost out on five good opportunities for a score. Three of those five chances can be chalked up to simple physics. The ball was saved by South Carolina the two other times. Gators goalkeeper Kaylan Marckese also made two saves at the net.

With just four games left before the SEC tournament, Florida will need to make an impact… and fast. Coach Becky Burleigh’s Gators have made 21 appearances in the NCAA Tournament. The last time Florida missed the tournament was in 2002. The last time before that was in 1995, the first season Florida welcomed a soccer team.

In 2002, Florida’s overall record was 10-10-2. In the SEC, the team was 5-3-1. To match that this season, Florida needs six more wins and just two more games with a loss. To do that, the team would need to beat its last four conference opponents and make it to the third round of the SEC tournament.

Then, the Gators would sit at 10-9-2 with a 6-4-1 SEC record. If they are able to do that, a winning record and decades of hard work might push them into a low NCAA tournament seed.

However, Florida currently sits in the b0ttom half of the conference (8/14). If each SEC team stays as is for the tournament, the Gators will face Auburn in round one. In 2017, Florida topped Auburn 1-0 to get to round three of the tournament.

For now, the Gators need to focus on finding points wherever they can. Next up, they’ll face Alabama in Tuscaloosa. Alabama is currently 7-7-1, but sit just 1-5 in SEC play.