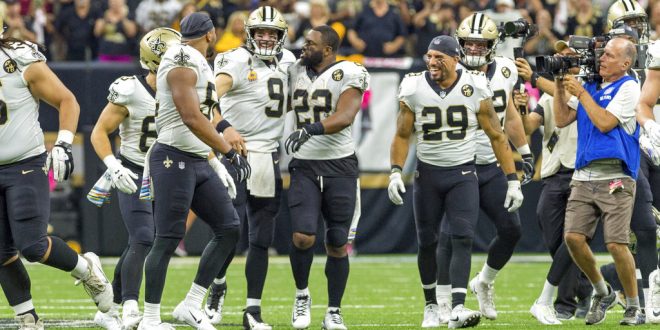 Drew Brees celebrates after breaking the NFL record for passing yards as The New Orleans Saints take on The Washington Redskins during Monday Night Football at the Mercedes-Benz Superdome in New Orleans, Monday, Oct. 8, 2018. (The Daily Advertiser via AP)

The New Orleans Saints remain the best team in the NFC South, all thanks to an offensive takeover at home.

The Saints entered Monday night looking to capitalize on early season momentum, found by beating teams such as the Browns, Falcons and Giants.

Packing up the @JohnFayard after a historic night, 4th straight win – bye week up next! #Saints pic.twitter.com/provNZWAvL

The Saints had no trouble on either side of the ball, only allowing 283 yards of total offense from the Redskins. The Redskins struggled to move the ball down the field with just 18 first downs. Protecting the ball was also an issue, with the Redskins turning the ball over twice.

“I’m not up here to point at any body, say they played poorly. I think overall, our whole team played poorly and that’s a reflection on myself. I think everybody in that locker room hopefully will say they need to play better, and I absolutely understand that the coaches have to on this staff have to coach better, and that’s the only way we can look at it,” Gruden said.

But Gruden is looking to the future, and remains positive.

“Moving forward, we have Carolina coming in, we’re 2-2, there’s a bright outlook, we’re still right there, and we’ll continue to be. But we have to get some things fixed,” Gruden said.

Something to note: For the first time in the entire season, the Redskins scored a second half touchdown in Monday night’s game.

The reign over the NFC South

Monday night’s win earned the Saints a 4-1 record, and a continuation over their lead in the NFC South. But will it continue? The Saints enter a bye week before a two-game road trip against Baltimore and Minnesota.