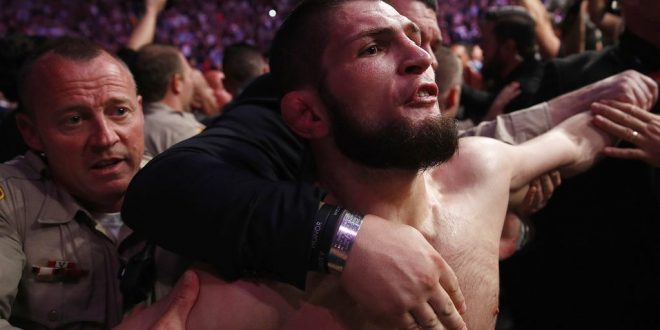 Khabib Nurmagomedov is held back outside of the cage after fighting Conor McGregor in a lightweight title mixed martial arts bout at UFC 229 in Las Vegas, Saturday, Oct. 6, 2018. Nurmagomedov won the fight by submission during the fourth round to retain the title. (AP Photo/John Locher)

UFC 229, Khabib Nurmagomedov was on a mission to defeat trash-talker Conor McGregor at his own game inside the T-Mobile Arena in Las Vegas, Nevada. The fight was one of the biggest mixed martial arts showdowns in recent memory. Khabib submitted the former two-division world champ in the fourth round of their highly anticipated title match with a neck-crank.

But, after Khabib won, he immediately jumped the fence of the octagon and began to attack McGregor’s trainer, Dillon Danis. This was when all hell broke loose. The incident incited a brawl between the two teams and secured this to be the most infamous MMA moment in history.

Why Did This Happen?

Surprisingly, the reason for Khabib jumping the fence relies solely on his feelings. He felt that McGregor’s team and staff stepped over the line with insults towards his, faith, family and country of origin.

Khabib is a Russian devout Sunni Muslim, a branch which is the largest denomination of Islam. He grew up in the remote village of Sildi in the Tsumadinsky District, which is present day Dagestan, Russia. Almost 83% of the population in Dagestan identify themselves as part of the Islamic faith.

Furthermore, Khabib later apologized for his actions in the post-press conference and immediately demanded respect from the media.

Speaking of fatherly respect, Khabib’s father Abdulmanap Nurmagomedov, seen below holding on to the bear by a leash, has mentioned that he will “impose a punishment tougher than the UFC’s.” Abdulmanap continued to state his punishing remarks to SBNation for MMA, Bloody Elbow, “I warned him. For me, discipline comes first. You do whatever you want in the Octagon, [but] outside — this is the border of civilians, where there are children, women, strangers.”

Plus, Abdulmanap is not only Khabib’s father, he’s also his coach, mentor and one of the most celebrated coaches in Dagestan.

But, will it be a tougher punishment? The Nevada State Athletic Commission (NSAC) have already withheld Khabib’s $2 million fight purse due to the ongoing investigation. UFC president Dana White wasn’t pleased with Khabib’s actions and stated who got paid and who didn’t.

White also stated that they might have to strip Nurmagomedov from his lightweight title belt depending on how long the NSAC’s suspension will be. But, the NSAC announced that they will be filing complaints on both McGregor and Khabib on Monday via ESPN. NSAC chairman Anthony Marnell had this to say about the complaints:

“Because we withheld one purse, we will have to move expeditiously to a complaint and hearing,” Marnell said. “We have held 100 percent of one of the fighter’s money, so the goal is to get the complaints out in the next 24 to 48 hours,” according to MMAnews.com.

The quick complaint decision for McGregor following the Khabib punishment was due to video reviewing of the brawl incident.

Recent grad from the University of Florida. Editing all articles on here while helping out the newbies. Love all things basketball.
@@MarcoJMartinez_
Previous Dodgers win: Return to the Nation League Championship Series
Next Saints Add to 4-Game Winning Streak Against Redskins, 43-19